Next on The Scoop: As Bucharest Starts Mass Euthanasia, Steven Seagal Adopts a Pup to Make a Point

Is It too Soon to Be Making Light of Michael Vick?

This creepy "Sports Friends" cartoon does, and we think it fails. How about you?

We found this animated cartoon on Yahoo Screen on Friday about Michael Vick, the NFL player famous for running a dog fighting ring. It’s from an animated series called Sports Friends. The episode is called “Michael Vick Meets LeFluffy.” Is there any way that it isn’t creepy and in bad taste? I’ve been looking hard, and I have yet to find it.

I’m a big fan of gallows humor; in fact, sometimes humor is the only way to talk about really horrible things. The Marx Brothers’ Duck Soup, for example, depicts the farcical nature of politics and war in ways that you just can’t pull off in straight-up drama. But in order to pull off that kind of comedy, you need a strong sense of tragedy. Gallows humor just doesn’t work unless you really understand what’s horrible about the situation you’re sending up. Whatever else you think about Michael Vick‘s 2007 conviction for running a dog-fighting ring, it’s brimming with tragedy and horror. 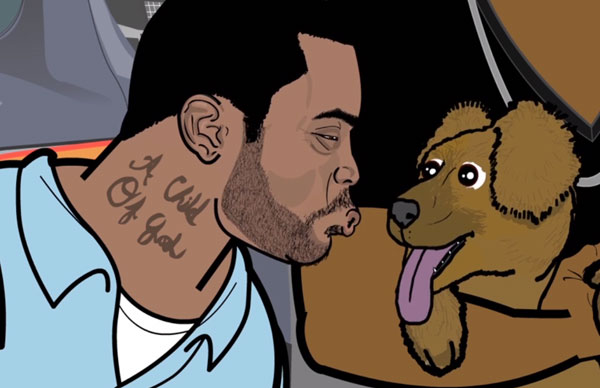 At its heart, there’s only one joke here: Michael Vick, who has been very, very bad to dogs, making lovey-dovey kissy-face noises at an adorable puppy held by LeSean McCoy. And that joke wears out its welcome within seconds, at most. (One of our editors, Keith Bowers, said he waited with horror, expecting Vick to spike the dog, which doesn’t happen, but it created creepy, icky tension nonetheless.)

Whatever else he is, Vick isn’t a cartoon. This isn’t the first attempt to make him into one. It could be argued that the entire media feeding frenzy around his dog fighting was an extended attempt to render him into a cartoonish villain that could be sold and marketed on the 24-hour news cycle.

Vick, despite the media depictions of him, is a real man with a real history with consequences. Real money changed hands, and real dogs died. One day there might be Michael Vick jokes to be made, but they would depend on being able to look beyond a headline and see more than a dumb punchline.

So far the comments on the cartoon seem to break down into two stark categories: People who are outraged that Vick’s abuse is trivialized as a joke, and those who believe that it’s time to tone the outrage down and leave the whole thing behind.

What do you think? Let us know in the comments below.