Next on The Scoop: The Top 10 St. Patrick’s Day Dog Names

My dog uses his own kind of March Madness to make NCAA Tournament selections. Hint: Mascots factor into his picks.

On the day that our rescue dog, Rocky, was born in Morristown, Tennessee — on June 11, 2011 — I was practically a bounce-pass away in Knoxville, doing an event at the Women’s Basketball Hall of Fame for my recently released book, Bird at the Buzzer, about the University of Connecticut women’s program.

At the same time, in the summer of 2011, the UConn men’s team was the reigning NCAA champions. UConn’s mascot, of course, is a Husky.

So it’s really no surprise that Rocky has become quite the fan of college basketball. And each March, he excitedly hops up on our couch, takes control of daddy’s laptop, and fills out his bracket for the NCAA Tournament.

This year is no different. While Rocky’s heart is heavy — neither his adopted Huskies, nor his hometown Tennessee Vols made the field of 68 — he spent his Monday night back in front of the screen, making what is sure to be the winning bracket on ESPN’s Tournament Challenge. 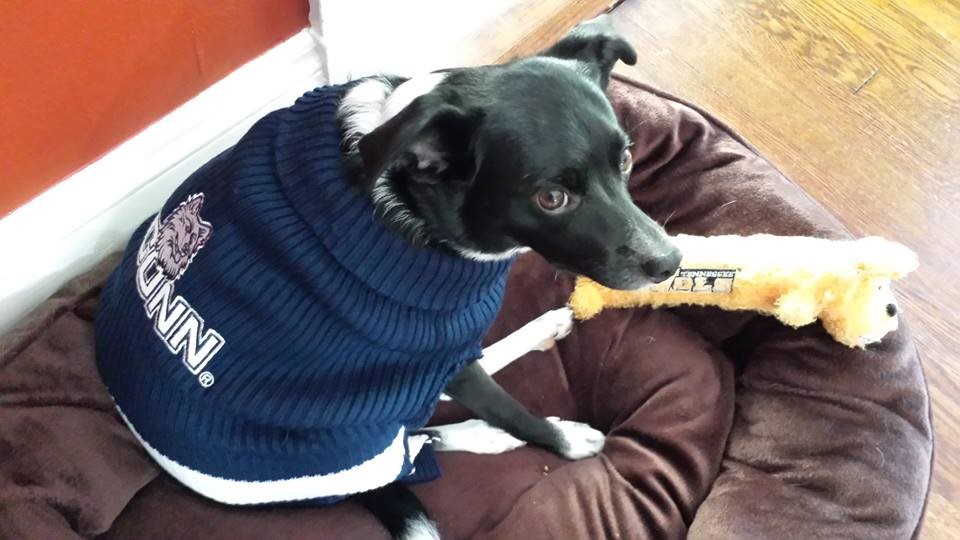 Of course, Rocky’s methodology is nothing like conventional bracketology, as you shall see. Let’s just say, in Rocky’s version of March Madness, every dog has his day.

This year’s tournament bracket posed some challenges for Rocky, as it seemed the NCAA Selection Committee put virtually all the dog mascot teams into just two of four regions. So some tough choices needed to be made as the region narrowed its way to the Elite 8. In the round of 64, there were the obvious picks: Albany Great Danes, Georgia Bulldogs, and North Carolina Wolfpack (gotta go with the ancestors there). Rocky hates cats, but he chose the Villanova Wildcats because this dog knows the ultimate underdogs — the No. 16 seeds — have never won a first-round game, and 2015 figures to be no exception. (See: Kentucky Wildcats).

But the pick that captured Rocky’s heart was Virginia, the Cavaliers. One of Rocky’s best friends is a Cavalier King Charles Spaniel named Mia, so he put Virginia through to the Elite 8 against University of California, Irvine. They are the anteaters, and Rocky would just love to play with a stuffed anteater. Who wouldn’t?

In some ways, this was Rocky’s toughest region to fill out. In another way, it was the easiest. Tough, in that there is only one dog mascot in this group of 16: the 12th-seeded Wofford Terriers. But the always-savvy Rocky knows the 12-seed has become the most-likely of the double-digit seeds to pull upsets, so he has them reaching the Sweet 16. But the team he takes all the way to the regional final is Wisconsin. They are the Badgers, and one of Rocky’s most-beloved buddies at his daycare is a Corgi named Badger. This was a very easy call. 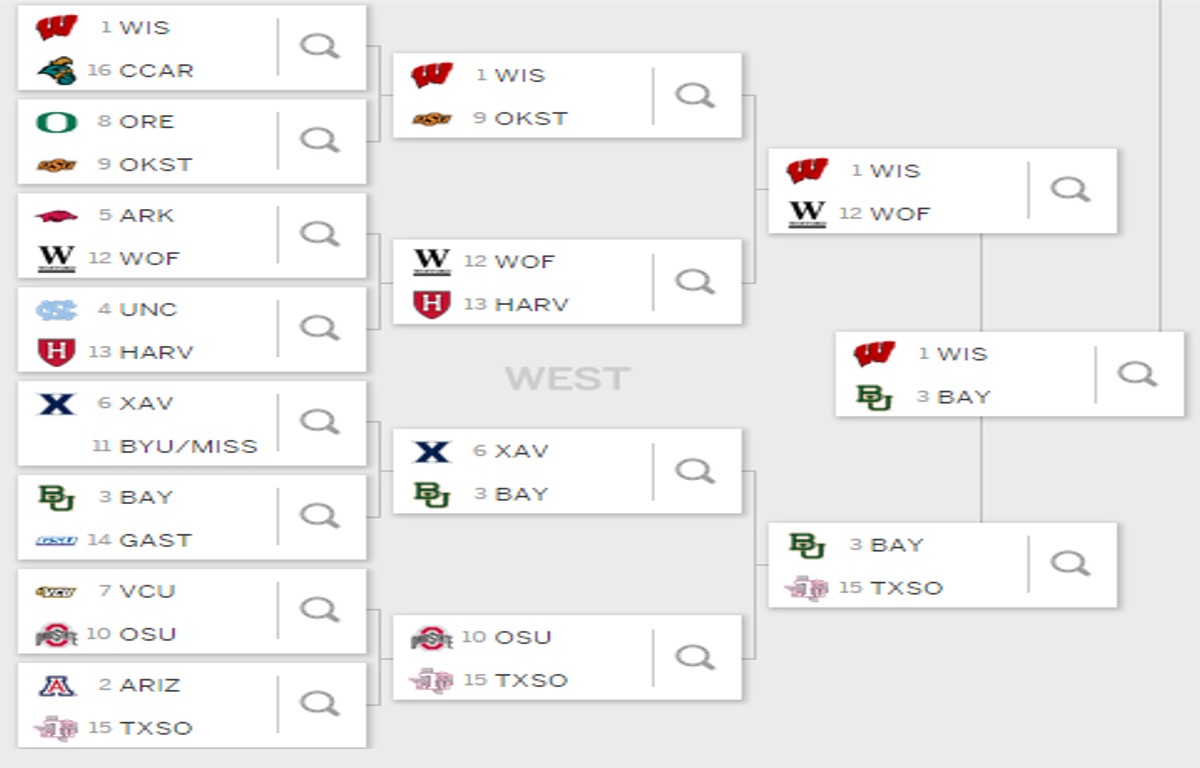 Another region short on canines, but loaded with Eagles (E. Washington), Ospreys (N. Florida), Hawkeyes (Iowa), and those darn Wildcats (Davidson). There’s even a Bison! (N. Dakota St.). So this region is truly about survive and advance for Rocky, who rides Gonzaga (Bulldogs) and Georgetown to the Elite 8. Why Georgetown? We don’t know what a Hoya is, but their mascot is a Bulldog. Good enough. 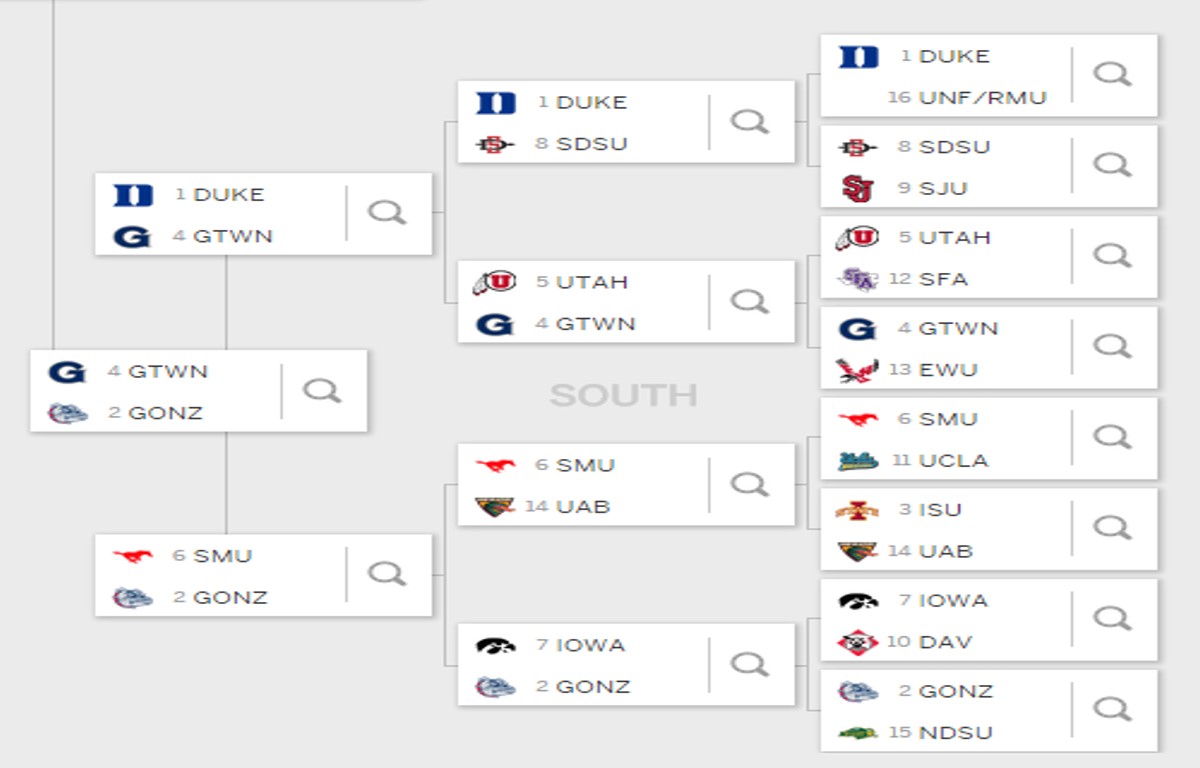 Rocky, who lives in Quincy, Massachusetts, and whose daddy once attended Northeastern University, gets a triple-whammy here, as the Northeastern Huskies made the Tournament for the first time in 24 years. Sadly, the Huskies face off in the Round of 32 against the Butler Bulldogs. Only one can win, and Rocky loves Butler’s pedigree. They made the finals in 2010 and 2011. In the Final 8, Rocky picks Butler vs. Maryland. Why the Terrapins? Well, they’re a turtle, and Rocky remembers that crazy summer day when a giant snapping turtle meandered into his backyard. Must be a sign. It had better be, because Rocky has picked Maryland to end Kentucky’s undefeated season in the process. 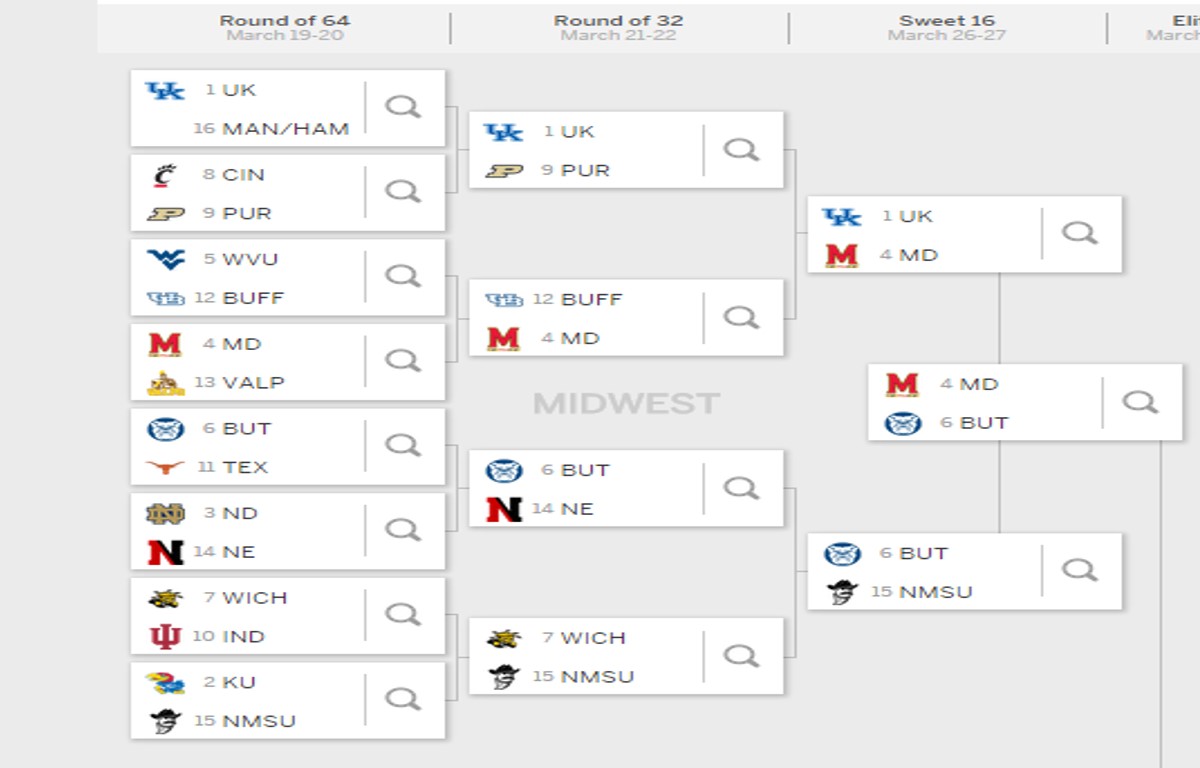 In the Elite 8, Rocky goes with what he knows: The two Bulldogs (Butler and Gonzaga), Wisconsin (for Badger), and Virginia (for Mia, the Cavalier King Charles). But Rocky remembers that one time when he tried to steal a carrot from Mia and she gave him a smackdown, so he takes Gonzaga to win that semifinal. But Rocky has never had anything but fun times with Badger, so it’s on Wisconsin! All the way to the national championship. And, hey, let’s face it, Hank the Ballpark Pup lives in Milwaukee. And we all know he’s the top dog.

Read more about dogs and sports:

Posted in Rescue, Dogs and Sports,