Next on The Scoop: Buying a Home for Your Dog? You’re Not Alone (Plus, How to Introduce Your Dog to Your New Home!)
Amazing Dogs 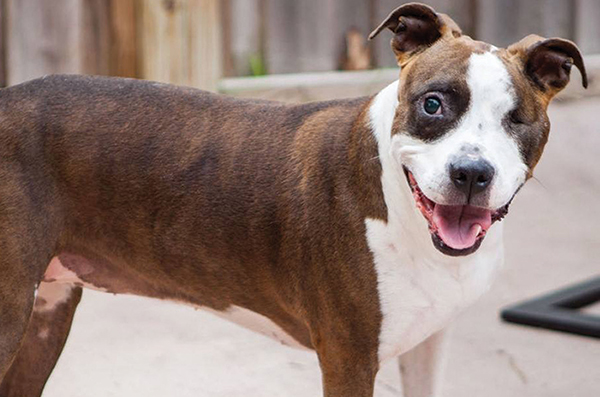 How did Star go from a shot and injured Pit Bull mix on the streets of NYC to inspiring her owner to start The STAR Project to help other high-risk dogs?

She may have been dead according to the media, but she wasn’t dead to him. Charlie Cifarelli of Lincoln, Nebraska, couldn’t get the video of the Pit Bull terrier mix out of his mind.

It all began in August 2012 when a homeless man suffered a seizure. His dog, a young and sturdy female Pit Bull terrier mix, refused to leave his side and became agitated. When police arrived on scene, the dog began barking, and officers shot her point-blank in the face. The dog’s screams prompted witnesses to take notice. People began taking videos of the scene in Manhattan’s East Village, and in today’s world, such videos go viral.

The man eventually received medical attention, but the dog? Everyone assumed she died. But Charlie was not convinced.

He used his connections and business acumen as the C.O.O of a recycling company to speak to officials within New York’s animal care services department, at first under the guise of recycling possibilities. He discovered that she suffered extreme soft tissue damage as well as bone damage and lost her eye. But she lived.

“I couldn’t believe it,” said Charlie, originally of New York. “Once I got that info, I went wild.” He immediately created a Facebook page dedicated to the dog named Star and contacted the media. “I got the public really behind me,” Charlie said. “This dog goes from being dead to having a Lazarus-type turnaround.”

The quest to find the miracle Pit Bull continues

However, soon after, Star was back in the wind. No one knew where she went.

Charlie plugged away at his quest to find her. Then one day, he got a break. He saw a picture of Star and, with some extraordinary sleuthing, he narrowed down his search to Pennsylvania. Charlie then began calling every rescue group in the area — hundreds of them — on the off chance one of them might know something about this dog. Eventually, one did. After four very long months, he had finally found her.

After just one visit, Charlie knew Star was his soul pup. She had melted his heart all over again.

He bought a house with enough land for kennels and an 8-foot fence and networked with the owner of where Star stayed in Pennsylvania as well as the Mayor’s Alliance. In April 2013, it was official. Star, now 6, was his.

Starting The STAR Project to help other dogs like Star

Charlie knew that Star was lucky. He didn’t buy into the misconception of an “aggressive” Pit Bull from the streets as being a dangerous pet. He wondered how many more Stars were out there that would never get a second chance? That’s when he and his partner Jenn Sanchez became involved with the STAR Project, through which high-risk dogs are routinely rescued and adopted out to qualified homes through a thorough screening process.

Last year, more than 20 dogs’ lives were saved through the organization. A big component of the STAR Project is the emphasis on education — about canine behavior, dog ownership, spay/neuter, children and dogs.

Charlie and Jenn hope to do more than just educate. They want to create a dog food bank for owners in need, acquire land for a future dog sanctuary in the Midwest and write children’s books to educate and inspire the next generation about dog ownership and rescue. “I’m willing to dedicate my life for this,” Charlie said. “It would be wonderful to get up every day and do this … [Star] has been the best part of our lives.”

Kyra Kirkwood is a Southern California-based writer, author (Move Over, Rover!) and journalist. She lives with her husband, two kids, one rescue dog and three reptiles. Follow her at kyrakirkwood.com and on Twitter at @IAmTheWriteMom.