Many pet parents were not allowed to return home for their pets, so unofficial and official rescuers stepped in to help.

The city was burning. A raging wildfire was pushing its way into Fort McMurray, Alberta, Canada and more than 80,000 people needed to evacuate a city that has only one road out. As people fled their neighborhoods, Victoria Bradbury, Thomas Morris, and Morris’ mother were trying desperately to drive back into it and get to the couple’s dog, Mufasa, who was alone in their apartment (as he usually was when Bradbury, a teacher, was at school).

With traffic hardly moving and smoke filling the air, Morris said goodbye to his wife. She would stay behind the wheel and navigate through the slow-moving traffic while Morris and his mother went for Mufasa on foot. For an hour and a half they walked through smoke, ash falling on their shoulders. When they finally opened the apartment door, the 2-year-old terrier was ready for the most important walk of his life.

“He was actually incredibly calm. I was really impressed with him. He’s usually not that calm —  especially when we’re stressed out,” Morris tells Dogster.

After quickly grabbing a few changes of clothes, water, dog food, and a crate, Morris, his mom and little Mufasa headed out into the chaos, making their way through the hot streets for miles until they were reached Bradbury and their vehicle. Together at last, the family headed north, out of town and toward an evacuation center. Mufasa was one of the lucky ones —  for many dogs in Fort McMurray, the wait for rescue would be much longer.

The evacuation orders came down on a Tuesday afternoon, and as neighborhoods were cleared, many pet owners found themselves on the wrong side of police barricades, unable to reach animals they’d left at home earlier in the day. 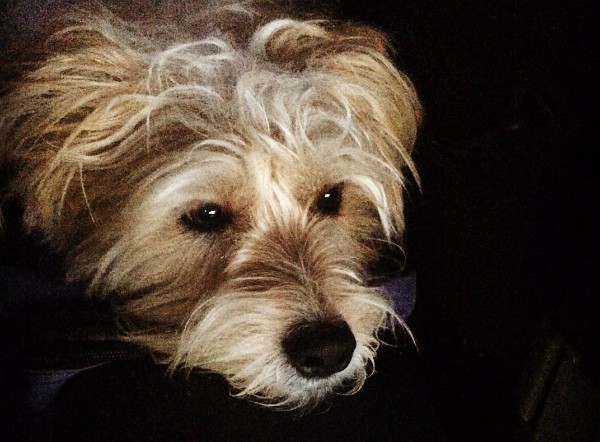 Mufasa’s dog mom posted this pic of her sleepy pup once the family was safe in an evacuation camp. (Photo courtesy instagram.com/terrierterror)

As the mass exodus continued into the night, desperate pet owners who’d left the city turned to social media in the hopes of arranging rescues for the animals they had been forced to leave behind. Some tried to call the Fort McMurray SPCA, but the building was empty — the staff, volunteers, and animals had also been evacuated from city.

Animal welfare agencies from outside the city prepared to respond, but as the fire raged, officials said any animal rescue missions would be too dangerous. Devastated, many pet parents made their way down the highway to evacuation centers in the town of Lac La Biche and the city of Edmonton without their animals.

“I don’t know what I would do in that situation. I would be heartbroken,” Morris says, adding that he was happy to learn of rescue missions in the coming days, even if some of them were not exactly officially sanctioned.

According to CBC News, one of those unofficial rescue missions was conducted by a group of truck enthusiasts known as the Western Canadian Powerstrokes. When the evacuation left many from Fort McMurray stranded on the side of the highway, these truck fans drove toward the city on a mission to get gas to those who needed it. Two days after the evacuation, the group was allowed into the city to refuel. CBC News reports that that’s when some members of the group went rouge, offering up their services as animal rescuers on Facebook and saving about a dozen pets before police shut them down, ordering them out of the evacuated neighborhoods. The 12 pets were taken to an emergency reception center to await reunions with their grateful humans. 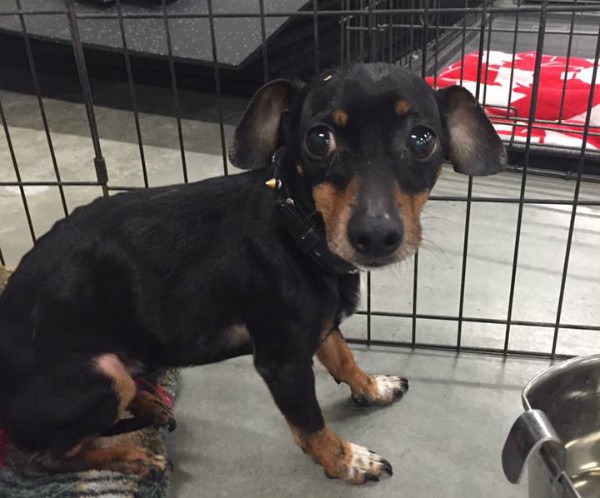 This little guy has since been reunited with his human after someone saved his life and brought him to an evacuation center in Lac La Biche. (Photo via Saving Grace Animal Sanctuary on Facebook)

Dozens of other unaccompanied pets were already at evacuation centers in other cities and towns, having been saved by either officially recognized animal welfare workers, or just well-meaning individuals on their way out of town. A database of registered stranded pets (and in some cases, simple Facebook photos) helped evacuation volunteers match pets with their people.

The Fort McMurray SPCA asked for and was given permission to return to the city on Thursday, two days after the evacuation. Staff members who lost their own homes in the fire came back to re-opene the shelter and assist police in rescuing as many animals as possible over the next 96 hours. Pets were temporarily housed at the FMSPCA before being moved to a dedicated pet evacuation pickup center.

Mufasa’s family is glad to see the shelter their dog was born in back up and running. Bradbury, Morris, and their lucky little terrier were briefly separated again when they were accidentally put on different evacuation flights to Southern Alberta. Once again, Mufasa was happy to be reunited with his people — a fate that is being shared by more and more dogs thanks to the heroic efforts of animal lovers in Fort McMurray.

Authorities have asked people to refrain from calling 911 to report pets still stranded in Fort McMurray and instead urge anyone concerned about their animals to complete the Emergency Pet Rescue Request form online.