Next on The Scoop: Vacuuming the Corbs: Watch Corbin the Corgi’s Preferred Method of Furminating

A dog lies at her friend's side as the traffic whizzes by. If ever there was an image of the loyalty and love of a dog, this is it.

A vehicle on a busy Los Angeles area roadway struck a yellow Labrador retriever, who died on the street of head injuries. But the dog wasn’t alone in the fading moments of life — or after death. The golden’s loyal canine companion was right there, steadfastly guarding her friend in the heavy morning commute. The black Lab stood and lay beside her fallen friend as traffic whizzed by, not wanting to leave to get to safer ground herself.

A passing Good Samaritan stopped, put up traffic cones around the heartbreaking scene, and called animal control. Officers took the heroic Labrador into their care, and named her Grace. She has no tags or microchip, and as of this morning, she is up for adoption. A worker at the Baldwin Park Animal Care Center says Grace will go to “the first person who comes in and starts the paperwork on the animal.” 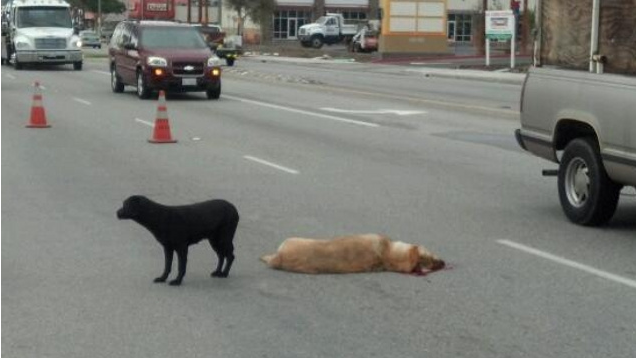 Hmm, the adoption seems pretty quick. (The accident happened just a few days ago.) Who knows if their owners may be on vacation, or ill? And just giving Grace over to whoever fills out the paperwork first? She deserves better than this.

At least shelter workers say Grace would be best with someone who understands dogs, and can work with the one-year-old dog and show her compassion. Maybe they’ll be pickier about a home than that shelter worker let on. From what I’ve been reading and seeing, they’re showering her with lots of TLC.