Next on The Scoop: Pet International Recalls Beef Trachea Treats Over Salmonella Threat

Hank the Ballpark Pup Will Skip Spring Training This Year

Rescued by the Milwaukee Brewers during pre-season workouts last year, the now-famous dog sent toys for the Arizona Humane Society instead.

Not even Hank the Ballpark Pup is immune from the old saying, “You can’t go home again.”

The Bichon Frise mix who took the baseball world -– and the world in general — by storm last February after being adopted by the Milwaukee Brewers at their Spring Training facility in Maryvale, Ariz., will not be returning to the birthplace of his legend in 2015.

But that doesn’t mean Hank won’t leave a huge paw-print on the goings-on in Arizona. The Brewers, on Hank’s behalf, are donating toys and other goodies to the Arizona Humane Society.

Hank, named for Brewers legend Hank Aaron, has also become quite the legend in the past year, spawning his own merchandise line, earning his own Bobblehead, racing with the famous Sausages, raising more than $130,000 for the Wisconsin Humane Society and earning 2014 Dog of the Year honors at the World Dog Awards. 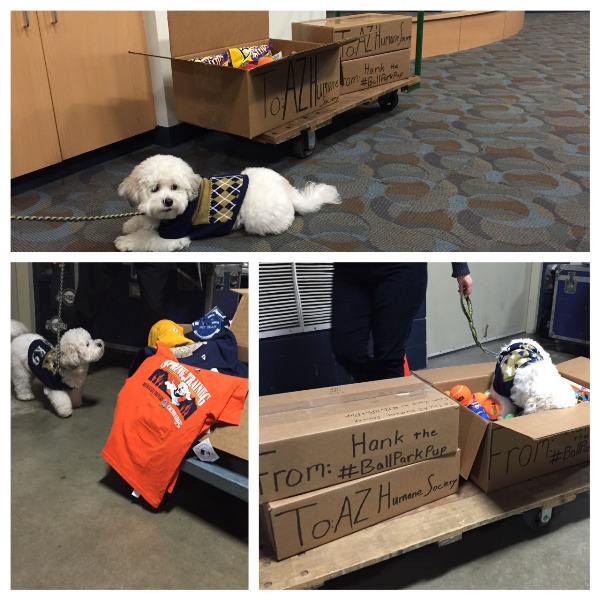 Hank has become so big in his adoptive home of Milwaukee, his full schedule of appearances precludes him from returning to Maryvale for Spring Training, where the team took him in last February as a stray who wandered into the baseball facility after being hit by a car.

Coaches and players took turns caring for Hank and allowed him to partake in Spring Training drills, and soon he became a viral sensation, eventually being officially adopted by the team’s legal counsel, as well as figuratively by the state of Wisconsin.

“The impact he’s had has been beyond anybody’s imagination,” Brewers chief operating officer Rick Schlesinger told MLB.com last week. “We figured, let’s keep him where his home base is and not travel him. Not to say someday he won’t go back, but this year he’s got a full plate — no pun intended.”

Last Wednesday, Hank participated in the Brewers’ annual Truck Day at Miller Park, helping to load the giant 18-wheeler with all the team’s Spring Training equipment for the drive to Maryvale. But along with the bats, gloves, balls, and uniforms were box after box of toys and other goodies that will be donated to the Arizona Humane Society.

That’s how Hank rolls. He has a big heart. And he showed it off last Saturday with his own Valentine’s Day card.

Roses are red. Hank likes to bark. We miss all of you filling up Miller Park! Happy Valentine’s Day! #SeeUApril6 pic.twitter.com/UbtW2js5Cm

Via MLB.com and WISN