Next on The Scoop: Law Requires Dangerous Dogs in Maine to Get Special Licenses
Good Causes 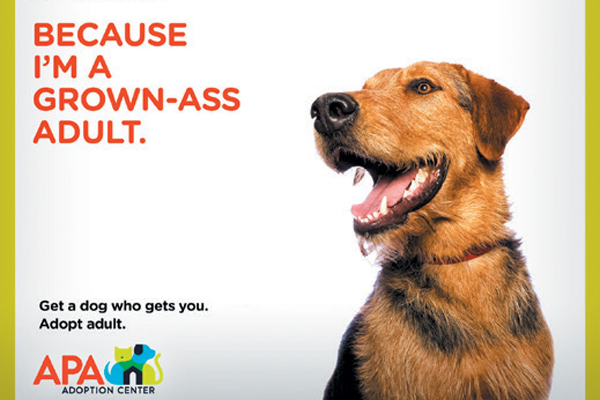 This successful Grown-ass Adult campaign brought awareness to the great qualities of older dogs to help them find homes. Find out how successful it was within one week.

All it took was a change in vocabulary — and an innovative campaign — for the Animal Protective Association of Missouri (APA) to see an increase in older dog adoptions.

“Unfortunately, adult dogs are often overlooked, no matter how great they are. I initially took this challenge to a few of our board members: Help us find a way to bring awareness to the many great qualities of our senior dogs,” says Sarah Javier, president and executive director of the APA. “One person responded, ‘Well, stop calling them seniors!’” A better name? “‘Call them what they are — grown-ass adults.’”

Sarah says they knew the campaign was a little risky but would be memorable. “Within one week the campaign went viral on social media with over 500,000 views and tens of thousands of shares,” Sarah says. The APA had people and shelters reaching out to them from all over the world.

“Dogs who were featured on social media were finding homes within 24 to 48 hours, which was not typical,” Sarah says. The average time adult dogs spend at the APA went from eight-and-a-half days to five-and-a-half. “When people are ready to add someone amazing to their family, they just might remember this campaign and consider a Grown-ass Adult. And when that happens, that is the success.”

Thumbnail: Photography Courtesy of the APA.

Editor’s note: This article appeared in Puppies, a special issue from Dogster magazine. Look for Puppies on a newsstand near you!

Elizabeth Anderson Lopez is an award-winning writer based in Lake Forest, California. She and her husband have quite the menagerie, including two rescued English Bull Terriers named Dexter and Maybelene.