Good for the Brits: Microchipping of Dogs Is Now Required by Law

All dogs 8 weeks and older must have an identity microchip. If not, their owners face a hefty fine. We should consider following the U.K.'s example.

On reading that microchipping your dog has finally become mandatory throughout the entire United Kingdom, my first instinct was to write something about the Brits getting all Orwellian on the pet front. I imagine that a lot of people, even hardcore pet lovers, had the same response. It’s one thing to stand on your soapbox and implore each and every pet owner to please, get the freaking chip implanted and save everyone a lot of heartbreak, misery, and money later on; it’s another thing to start writing laws that say “Do it, or we call the cops.”

But on thinking it over, I changed my mind. Good for the Brits.

Microchipping has been the law in Northern Ireland for four years, but it wasn’t until April 6 of this year that the Scots, English, and Welsh followed suit. Under the new law, if a dog over the age of 8 weeks is found to be unchipped, the owner will have 21 days to have it done or pay a £500 fine (that’s more than $700). On the whole, it’s a pretty lenient policy that gives owners plenty of opportunity to do the right thing; it’s not like Queen Elizabeth will be sipping Earl Grey and petting her Corgis while she oversees decapitations of non-compliant owners at the Tower of London. (Although the imagery might work well in an absurdist farce to be written at a later date.) 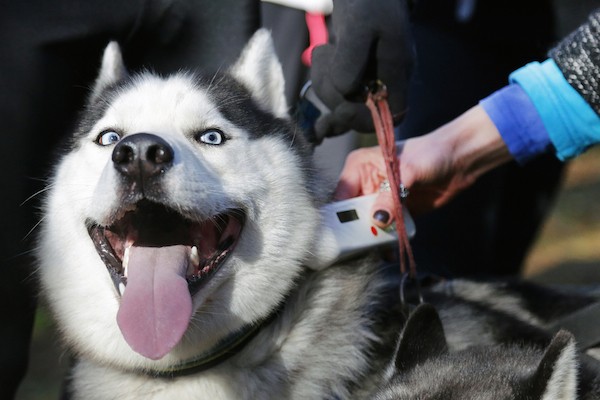 Dog getting his microchip scanned by Shutterstock.

It’s not unreasonable to expect people to take care of their dogs and to legislate a certain standard of care. I expect people to feed their dogs regularly, get them vaccinations and other basic medical care, bathe them, and so on. When someone starts to neglect those duties, most of us wouldn’t have any problem with calling legal authorities on them. My first response to the news item — the one that so many other people probably have — is based in part on the fact that the ID microchips seem so much like something out of any number of science-fiction dystopias like those in 1984, Neuromancer, or The Prisoner. The idea of using identity microchips for human beings surfaces periodically, and understandably there’s a huge backlash against it even as a hypothetical proposal. I’ve been known to be right at the front lines of such backlashes.

But frankly, if I want to get paranoid and freak out, my iPhone, which is constantly telling a government-run satellite network where I am at any given moment, is probably a much better place to focus my energy.

It’s true that I will probably freak out royally if the Brits ever decide to start inserting “and people” in all the places that the current law merely says “dogs,” but I’ve written enough stories about lost dogs that I now think that chipping your dog is just part of being a responsible owner.

Just as you should be willing to buy your dog kibble and keep up their shots, you should be ready to get that chip put in or just forget the whole dog ownership thing altogether. Shelters in both Europe and North America are already brimming over with dogs and cats who may never find their forever home. If chipping your pet were to become a thing that’s as expected of a pet owner as taking the animal to the vet and buying them food, that would free up a lot of resources to care for the ones who have been abandoned or lived feral lives from the beginning.

It might also deter people from abandoning their dogs in the first place. One of the “attractions” of dumping an unwanted pooch on some empty country road is that when the dog is found, it’s hard to trace the owner. If your dog is chipped, there’s a solid enough link between animal and the owner that it might make some think twice about their responsibilities.

So, good luck to the Brits. I hope that their new chipping policy works out for all involved. If it does, we might want to consider a few more mandatory chipping laws ourselves.