Next on The Scoop: How Well Can Dogs Smell? 5 Weird Things Dogs Can Sniff Out

The insurance company lets a dog loose on a family's dinner table in a pre-roll video ad you won't be able to stop watching.

Geico has done the impossible: It’s gotten us to watch one of those Internet “pre-roll” ads, typically shown before videos, that you can skip after a few seconds. We watched it not only once, but twice. Three times. Eight times. Fifteen times? Hell, sure, let’s watch it again:

Amazing, huh? The way the the dog suddenly seems to realize, “Oh, we’re really doing this? I’ve got carte blanche to go Dyson all over your dinner, and you’re just going to sit there, frozen, like frozen people or whatever? Great. Action. I love it.”

The ad, to our great satisfaction, is making a buzz in the advertising world.

“We call these unskippable,” Joe Alexander, chief creative officer at The Martin Agency, who created the ad, told USA Today. “Our goal is to bring attention to Geico in a space that is often hated.”

“It’s like watching a slow-motion accident,” he said, referring to the can’t-stop-watching aspect of the ad. “We’re trying to extend the action.”

David Schwab, a senior vice president at entertainment-marketing firm Octagon, concurs: “Human nature makes you keep watching the ad to see if this going to be a train wreck,” he told USA Today. “This ad makes you stick around.” 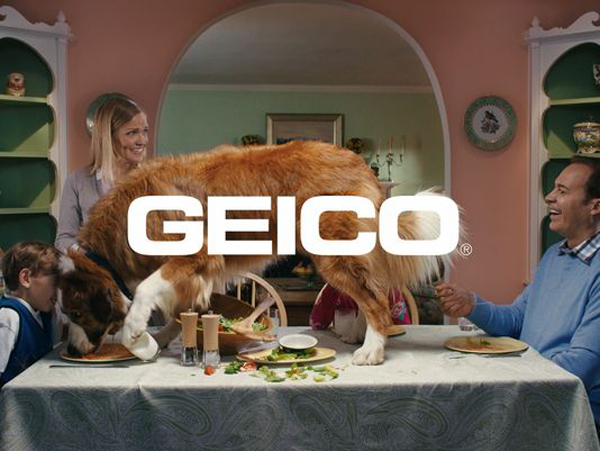 As for how they pulled it off, Alexander said that they did nine takes before the actors and the dog — Bolt — nailed the beginning of the scene. Then, on the 10th, they let Bolt have his way with everybody’s spaghetti, and he did not disappoint.

Go ahead, watch it again:

Posted in Vid We Love, Aww, In the News,