Next on The Scoop: Ohio Humane Society Rescues 61 Dogs Crammed in a Minivan

Watch a Beagle Heat Chicken Nuggets in a Toaster Oven

How many dogs just help themselves to what's in the oven? Besides the dog in this video, we mean.

Okay, this dog is not really heating up chicken nuggets in a toaster oven. That would be crazy. Dogs don’t cook. Dogs don’t “shop” and “prepare meals.” Dogs don’t open cute little bistros in emerging neighborhoods and make their own pickles.

Dogs eat. It’s what they do.

And this dog, Lucy, is going to eat. But she’s going to do it in the most amazing way, because those nuggets were meant for someone else. They were put in a toaster oven by a human for a human. This dog knows nobody is cooking her chicken nuggets — that would be insane. But maybe someone is? Maybe Lucy thinks, Hot damn, someone is finally cooking me chicken nuggets! 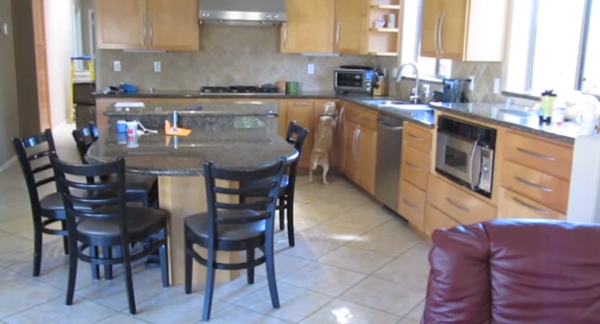 In any case, Lucy decides the chicken nuggets are ready — seven minutes after her owner put them into the toaster oven, which quite frankly is excellent timing for heating chicken nuggets — and she must have them. So she helps herself to them. And she does it in an amazing way:

Beautiful, right? And horrifying, because Lucy probably ordered a pizza right after this. The owner of this spirited Beagle, Rodd Scheinerman, explains how he captured the scene, according to Dog Heirs:

“A few weeks before, she took a roast out of the oven that had been cooking for a few hours … so I set her up. I put some nuggets in the oven … pressed record, and left. This was 7 minutes into the video.”

Better put a lock on the fridge.