Next on The Scoop: Ask a Vet: What are the Most Common Ways a Dog Can Get Poisoned?

When Humans Are Away, Dogs Will Play (On the Bed)

This viral video shows a dog frolicking on a forbidden bed, while a disapproving cat looks on.

Nothing can illustrate that better than the video below. It’s spreading across the Internet like wildfire, although we’re unclear on its origin. Regardless, it looks to be exactly what the text at the head of the video says (in English as well as Russian): “This dog is not allowed on the bed. So its owner installed a camera to check what happens when the dog stays home alone.” 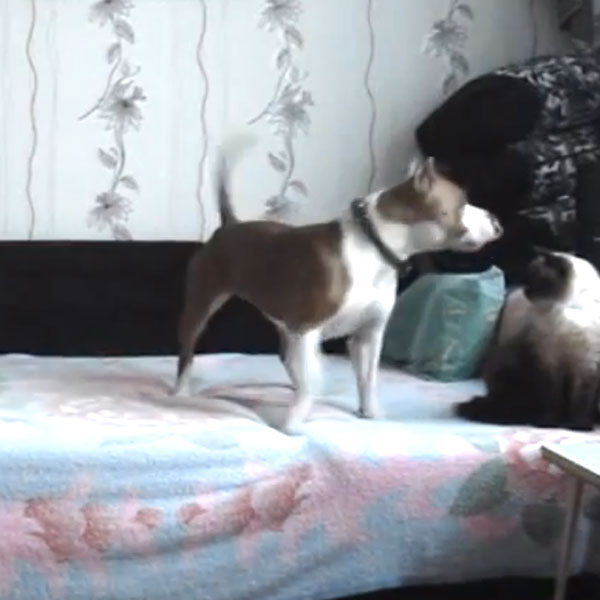 Most charming about the video, and perhaps the reason that it’s going viral across the web, are the details. The dog doesn’t go straight for the bed as soon as the owner’s gone. There’s at least one time lapse before he starts to consider it, and even then, it’s a casual, hesitant approach, kind of like he wants to give himself maximum deniability. Even when he finally makes the move, he just sniffs around a bit, like it’s totally no big deal that he’s on the bed.

And then, he cuts loose with utter abandon. Caution is thrown to the wind, and he’s joyously, happily rolling back and forth on the sheets.

The sheer delight that the dog takes in enjoying the forbidden bed is adorable, but the other detail that really makes the video work is the cat who lives in the house. The entire time, the cat sits there, entirely nonplussed by the actions of the canine. I’m sure the cat is disgusted by the utter lack of decorum the dog is showing. At one point, the dog oversteps his bounds just a little and gets a swipe from the cat to remind him of his proper place.

I’m not sure about the behavior patterns of mice, but I’m pretty sure that there’s more than one dog who acts just like this one when the humans aren’t looking.