Next on The Scoop: What Qualities Do You Admire About Your Dog?

How Did Cute Dog Pictures Turn Into an Online War? Dogspotting

Until yesterday, I was blissfully ignorant that such a thing as dogspotting existed, or that there was a ferocious war being fought among its fans. Now that I know, all I can say is, “Of course there is.” In hindsight, the hobby and the controversy seem inevitable. If dogspotting did not exist, the Internet would have to invent it.

For those who are as out of it as I was a mere 18 hours ago, dogspotting is an Internet “sport” based in a Facebook group that as of right now has about 28,500 members. It started out in 2006 as a playful pasttime invented by John Savoia, a dog-lover from Boston.

The basic goal of dogspotting, of course, is to spot dogs and then to report them to the group. Not just any dogs; they have to be dogs that the spotter doesn’t know or hadn’t seen before. No spotting of your own dogs, your neighbors’ dogs, and so on. If the dog spots you, all the points go to the dog. “It’s something I came up with in 2006 and just shared with a couple friends,” Savoia said in an interview with BuzzFeed last month. “This was before mass smartphone adoption and picture messaging and such. All we did was keep track of daily point totals. It was all about the points and gamifying looking at dogs. No cute factor then.” 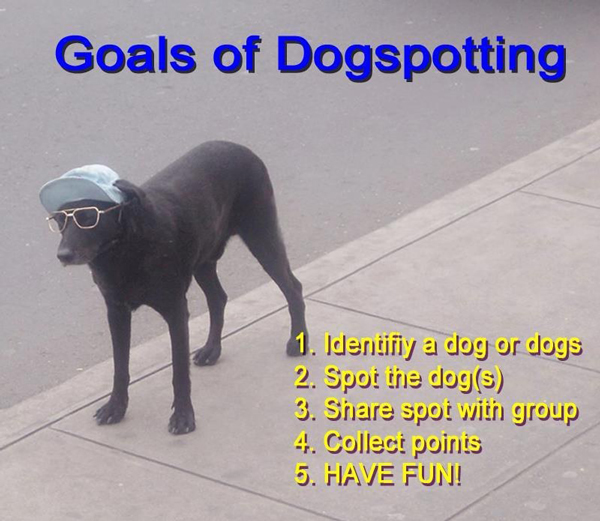 Originally, dogspotting was governed by a set of simple, irreverent rules, known as the Free Point System. Spotters could improvise bonuses for themselves or other spotters based on whatever qualities they saw in the dog or the description. In a particularly vivid text description of a dog, for instance, someone might get “+1 for really descriptive words.” In the BuzzFeed article, one picture of a dog sitting next to a piece of his own poop gets “+1 for not giving a s***.” 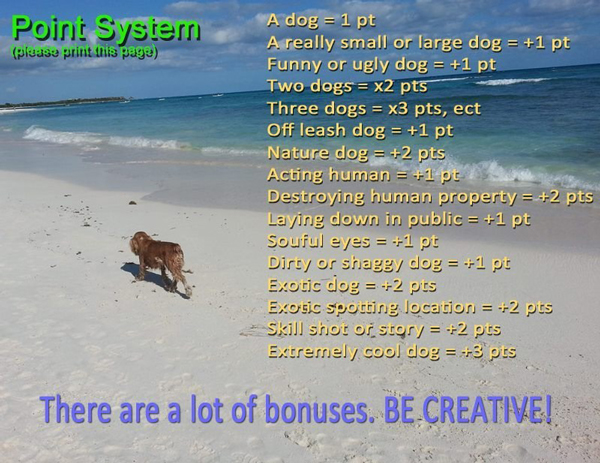 That ended Oct. 5, with the triumph of the Orthodox System, designed by Josh Boruff and David Thorpe. The Orthodox System doesn’t allow for improvisation. All the possible points are laid out in rigid, quantifiable form. Orthodox Rules obliterate all improvisation or ambiguity. Someone even uploaded an official rules document to Scribd. You can read it here:

How to Spot Dogs: Orthodox Rules

The benefit of the Orthodox Rules, according to the creators and adherents, is that “With Orthodox Rules, dogspotting becomes even more fun and challenging. In addition to points for size, special spots may be eligible for bonus points, multipliers and penalties.”

On reading the Orthodox Rules, the first thing that I thought was that you can really, really tell that they were written by guys. Not merely people with male anatomy, but guys who are really invested in being manly. The rules are just too — how can I put this politely ? — far too obsessed with size to conclude otherwise. Small dogs are bad, big dogs are very good in the new scoring system. The bigger you are — I mean, the bigger the dog is — the more points you score.

At the bottom end, small dogs get a -2 penalty in the new dogspotting regime. The rules don’t merely impose a penalty, but show a frothing contempt for small dogs:

These rat- and cat-sized creatures diminish the true canine experience. Not only do they count against your score, they are also ineligible for any Glory Dog bonuses (Shame Dog penalties still apply).

At the other end of the spectrum, “Extra Large” dogs get a whopping four points:

A rare and beautiful sight, these mammoth dogs include such titans as the Saint Bernard, Great Dane, Bernese Mountain Dog and Mastiff, among others. Wolves of all sizes are included in this category out of respect.

There’s a distinct theme of machismo throughout the rules. Dogs are penalized for being — well, cute — and awarded points for being tough, strong, and “heroic.” For instance, there’s a -2 penalty for “Effete Overtraining”:

Any dog performing humiliating actions designed solely for amusement, such as “dancing” or balancing a biscuit on its nose.

Dogs are also penalized -4 points for “Shameful Transport” (being carried in a stroller, handbag, etc.) or “Shameful Appearance” (“Any dog dressed in awkward, nonfunctional attire or groomed in an embarrassing manner”).

On October 5, the Facebook Group voted to do away with the Free Point System and install the Orthodox System as the standard. The change sparked major hostility. Supporters of the original system formed several splinter groups such as Positive Dogspotting, New Wave Dogspotting, and the Cool Dog Group. The Orthodox hostility to small dogs is one of the most controversial points.

If the Orthodox crowd seem driven by a need to make dogspotting a more manly sport, the advocates of the original scoring system can also be accused of taking their issue way too seriously. If nothing else, many of them seem to have never heard of Godwin’s Law, which states that “As an online discussion grows longer, the probability of a comparison involving Nazis or Hitler” approaches certainty. The Nazi comparisons fly fast and thick from Free Point supporters. New Wave Dogspotting has gone so far as to write the comparison into their group description:

This has been created in response to the recent change of leadership involving ‘orthodox’ spotting fascists. They are stuck in an age old era of oppression and prejudice. We will work together to form a new community that works for the good of spotters the world over and values the qualities of all dogs.

Just a quick history lesson here for dogspotters of all stripes: Fascism — and Nazism in particular — was a racist ideology of militaristic genocide. Actual Nazis got their jollies by herding people into shower rooms and flooding them with Zyklon-B. If the worst that happened at Auschwitz was that the commandant sneered at someone’s teacup dog, history would be very different. When you start shouting “fascist” at something that doesn’t involve major violations of human rights, you look like a clueless twit.

The cleavage between the two groups had been building for a long time before the Oct. 5 vote, but when the change became official, the hostility became much more open. A quick check of Twitter will show you just how seriously people take their dogspotting:

In response, the admins of the Dogspotting group have announced a “Dogspotting Reformation Summit” to try to reach reconciliation. David Thorpe’s description kind of makes it sound like negotiations to find a truce between Israel and Palestine:

With great difficulty, I have persuaded all parties to sit down and negotiate a new set of rules. I will be presiding over the 2014 Dogspotting Reformation Summit this weekend at Reid Paskiewicz’s secluded spotter’s blind in the Great Smoky Mountains of Tennessee.

The proceedings of this summit will not be made public, but I have been authorized to post periodic updates about the progress of the negotiations. I am cautiously optimistic that the Boruff-Savoia split can be resolved with a new set of Reform Dogspotting rules. 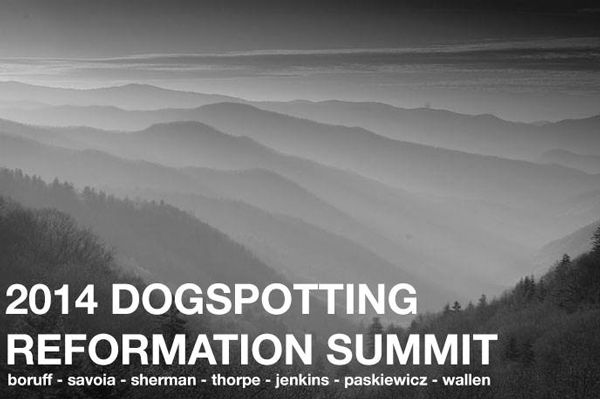 I’ve always thought of cute dog and cat pictures as a refuge from the madness that is the rest of the Internet. It feels kind of bizarre to see them subject to the same levels of abuse and infighting as everything else.

What do you think? Is Dogspotting something that can be fun, or is it doomed to take itself way too seriously?

One comment on “How Did Cute Dog Pictures Turn Into an Online War? Dogspotting”