Next on The Scoop: A Teen with Cancer Hits the Waves with Surf Dog Ricochet

Heartbreaking Video: A Dog Tries to Revive a Fallen Friend

This video is difficult to watch, but the grief this dog shows is why we keep dogs as companions.

The video below may not quite be to the “viral” stage yet, but it’s getting there. Since it first showed up two or three days ago, people have been reposting it and commenting on it with grief, outrage, or a mix of the two. It’s a hard video to watch, so be warned. It’s less than a minute long, but very intense despite its length.

It shows a small dog in the street, desperately trying to wake up a companion, who was struck by a car only a few minutes before. The little pup grows increasingly more frantic as her friend shows no sign of life, no matter how much she nudges the body. 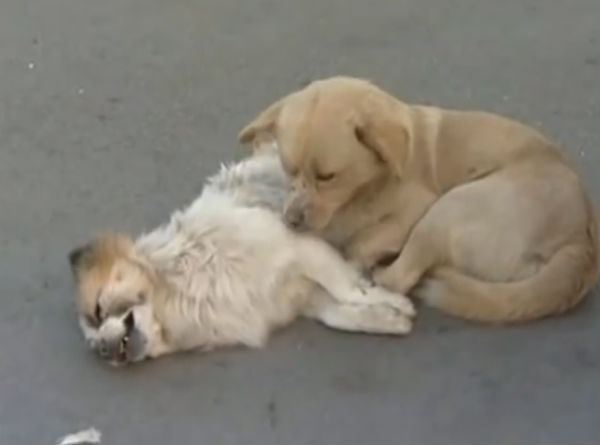 In December, we saw a similar video go viral, showing a dog in China who laid in the middle of a busy street for hours in near-freezing weather, watching over the body of his companion. Local neighbors put a stool next to the couple so that cars wouldn’t hit them, and eventually someone moved the body to the sidewalk, where the dog continued his vigil. 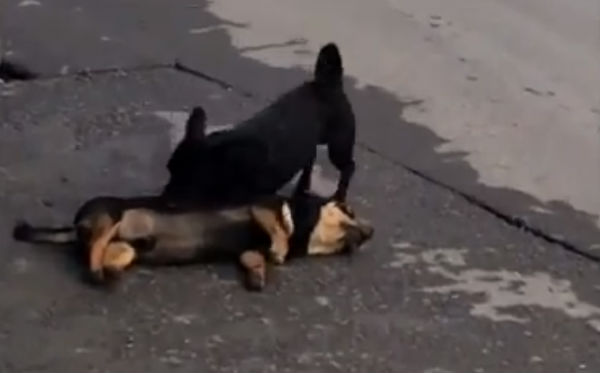 An almost identical situation happened in another part of China in 2012, and the same story played out in La Puente, California.

We’ve seen these stories before, and we’ll see them again. The fact that we do see these stories repeat themselves is a big part of why we love dogs so much, and why we keep them not only as pets, but as companions, friends, and helpers. Like us, they’re social animals. The dogs sitting in the middle of traffic over their dead friends and mates seems like a very human ritual, like sitting shiva or holding a small wake.

This one below strikes a little deeper even than the videos of the dogs who kept guard over their beloved friends in traffic. The images of the dogs in China and California are touching because they depict grief and loyalty in a very human way. But the dogs also seem to understand what’s happening. Their friends are dead, and all they can do is sit there and mourn. But the little dog in this video still doesn’t understand. She’s frantic to wake up her friend and run off to play again. She can’t, or won’t, understand, and any human who’s seen a loved one die knows that kind of grief, too.