Next on The Scoop: 10 Ways My Dog Is Becoming Human

The 78-year-old perpetrator won't face charges, but Banjo the dog will get a new home.

A 78-year-old man tied a 10-month-old terrier mix to railroad tracks earlier this month, later telling authorities his family “didn’t want the dog” and he “didn’t know what to do with him.”

And a train was on the way.

Luckily, the sharp-eyed conductor saw the man walking away from the tracks and slammed on the brakes. The train stopped just yards short of hitting the dog, according to the New York Daily News.

The conductor then alerted Union Pacific Special Agent Sal Pina, who quickly found the man and arrested him. Then the agent untied the poor, tiny dog.

“It’s probably one of the worst things I’ve seen,” Pina said. “I’ve never seen something like this.”

Pina said he was especially affected because the dog was the same breed as his own dog, only with a lighter coat.

The agent then interviewed the man at length in his office, where he decided he could not pursue an animal-cruelty case “because the man appeared to be confused, or senile and didn’t fully understand what he had done.”

A Riverside County Animal Services officer picked up the dog and took him to the Coachella Valley Animal Campus in Thousand Palms, where veterinary technician Jo Marie Upegui treated him and gave him a bath. She said he was in good health. She and her colleagues named him Banjo, a reference to railroad signals. Then she took Banjo home for extra care. 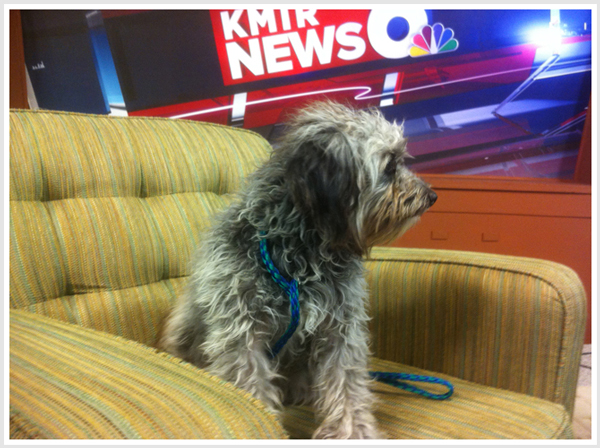 Banjo is available for adoption. Interested adopters should email shelterinfo@rivcocha.org and “share why their family would be best for Banjo.” Visit Riverside County Animal Services for more information.