Next on The Scoop: Westminster Behind the Scenes: At the Agility Trials with Tavari the Rhodesian Ridgeback

Foxy the Puppy Has the Cutest Eyepatch We’ve Ever Seen

The Chihuahua pup was left in a trash can in Grand Rapids, but her future looks bright.

We still have a day to go before Valentine’s Day, but Foxy, an eight-week-old Chihuahua mix in Grand Rapids, Michigan, has already been getting a lot of love. That’s a good thing, because until very recently, she wasn’t getting any at all.

McKenzie Coleman found Foxy in a trash can near her house on Feb. 5. Sitting in her living room, she heard some faint crying sounds, and when she went to look, found Foxy.

“I didn’t know what it was,” Coleman told local TV station WZZM. “I looked out there, didn’t see anything, and then saw a little puppy in the trash barrel.” 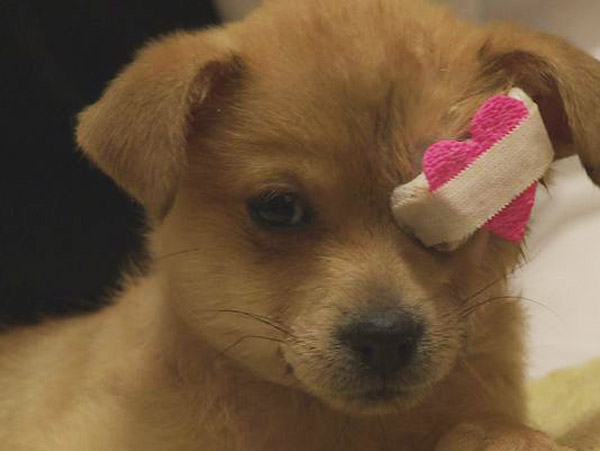 Had Coleman not found Foxy, the puppy probably would have died out there. It’s been a hard winter in the Eastern United States, and Michigan is known for harsh winters in normal years. The temperatures that night reached a low of about 14 degrees, according to Weather.Com. Hardly the kind of weather for a small pup weighing only three and a half pounds.

But the most important kind of love that Foxy got was medical. For a dog who had been left in a trash can in a Michigan winter, she was in remarkably good shape.

“We certainly were not seeing any ill effects as far as weather-related trauma, such as evidence of frostbite on the tips of the ears or the tail,” said Laurie Wright, the shelter vet at Kent County Animal Control.

But it was obvious that there was something wrong with Foxy’s left eye. Dr. Cassandra Bliss, a veterinary eye specialist, said on first examining Foxy that, “it appears she suffered from some type of trauma around her eye, though it could possibly be caused by a birth defect.” 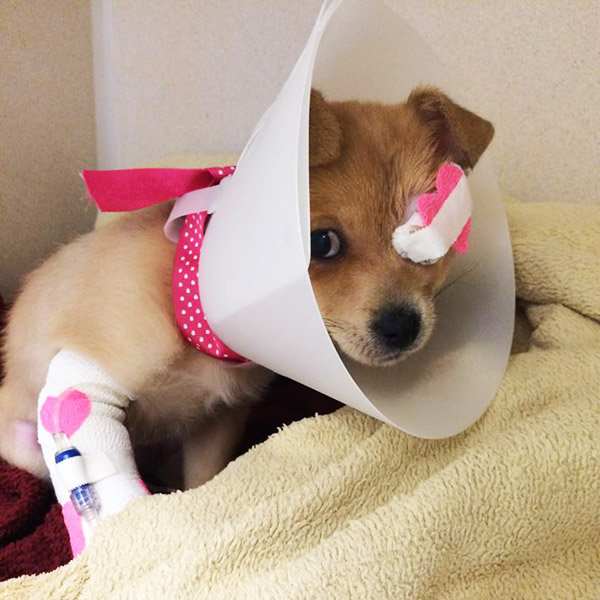 Yesterday, Roxy went in for surgery on her eye, performed by Bliss. It turned out that there were two problems: “When we got into surgery, after doing the ocular ultrasound, we not only discovered Foxy had an abnormal eye, but she also had a large three-centimeter cyst behind her eye,” Bliss said.

The eye and the cyst had to be removed, and Bliss gave Foxy a new, silicone prosthetic to take its place. Foxy is healing very nicely now. “She has a great prognosis,” said Bliss. “Tomorrow, she’ll be playing and acting like a puppy, and within a week, she’ll be completely back to normal.” 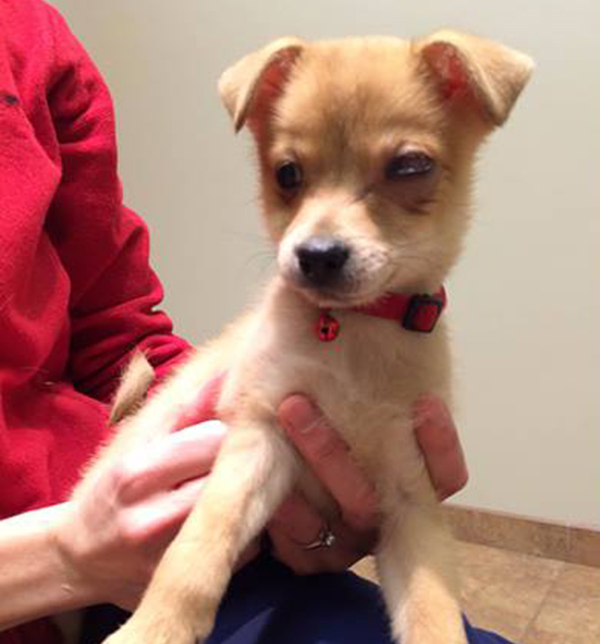 Although there’s nothing official yet, it looks certain that she’ll soon have a new family to go along with her new eye. Foxy has become a big star on TV, the Internet, and in social media, and already there have been inquiries about adopting her.

“She had a rough start in life, but it looks like she is going to have a great Valentine’s Day,” Laurie Wright said.

If you live in the Grand Rapids area, you can inquire about adopting Foxy or one of many other dogs at the shelter. Adoptions are $50, plus a $12 license fee for dogs, and $5 for cats.