Next on The Scoop: Ask a Vet: So, My Dog Won’t Stop Licking Herself!

Dog on the Roof: A 100-Pound Pup Helps Thatch Rooftops in England

The sky's the limit for Axel, his "highness" of thatch roofs. 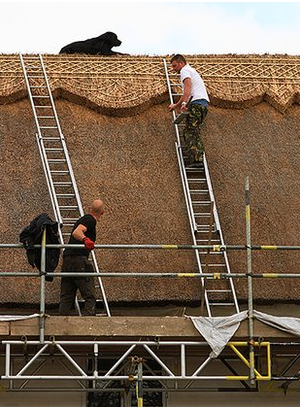 Axel the dog is high on life. Thirty or 40 feet high, in fact.

He spends most days perched on beautiful thatch rooftops as his owner fixes old roofs or installs new thatch roofs in Norfolk, England.

The 5-year-old Newfie-Lab-Rottie mix hasn’t missed a day of work since owner Richard Haughton found him as a homeless 6-week-old pup.

“We were sitting eating a packed lunch. Axel was on one side of the scaffolding, we were up over the ridge on the other and he managed to come up the ladder,” Haughton told the BBC. “We saw him up on the ridge — basically he thought he was going to get some food — and he’s been up with us all the time ever since.”

These days Haughton often carries the nearly 100-pound dog up the ladder. 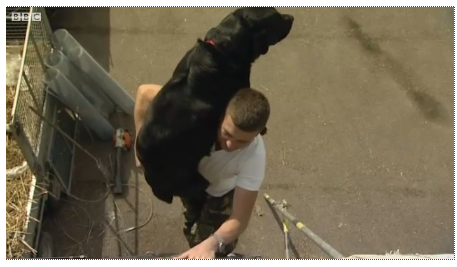 “He sits on the ridge and moves along it as we’re working,” says Haughton. 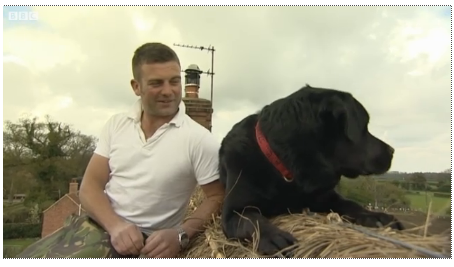 Charlie Tedder, who works with Haughton, says he loves having Axel on the team. “He’s a lovely guy to have around, such a good dog. He keeps an eye on us — he’s like a site manager.” 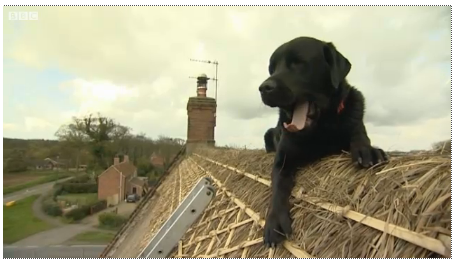 “He’ll let you know when he wants to come down — he’ll come to the top of your ladder and look at you, wag his tail — so we’ll pick him up and bring him down,” says Tedder. 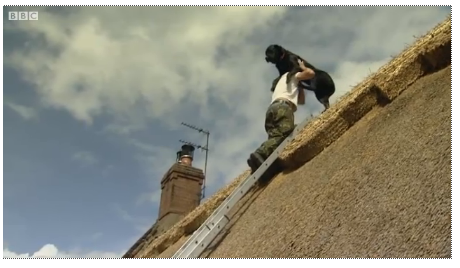 Awww! I love Axel! If I had the money, I’d buy a house in Norfolk with a thatch roof badly in need of repairs and I would feast my eyes upon his royal high-ness.

(Check out a sweet BBC video of Axel here. All above images are from the BBC.)

One comment on “Dog on the Roof: A 100-Pound Pup Helps Thatch Rooftops in England”