Next on The Scoop: Norman Is a Rescue Dog Who Looks Like Meatloaf

Unbelievable: An Ohio Man Tied His Dog to a Tree for Four Years

"The dog is not a human," said Jeremy Shane, who still faces numerous criminal charges.

In Ohio, a man left his starving dog tied to a tree for four years. He was arrested on Sept. 27. His punishment: a $25 fine.

That’s the story the many news agencies are running — it makes a great headline — but thankfully there’s more to it than that: According to the New York Daily News, Jeremy Shane Tempe also faces charges of cruelty to a companion animal, having an unlicensed dog, and improper chaining or tethering. The cruelty charge could get him six months in jail, if all goes right.

Let’s hope it does. When Tempe was asked to explain his treatment of his dog, he said, “The dog is not a human.” 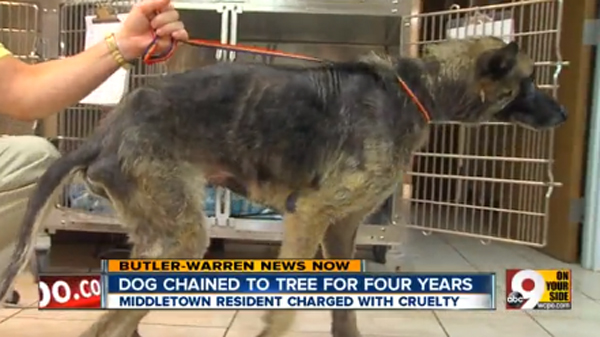 Here’s how he treated his dog:

According to the Daily News, the German Shepherd was discovered by police in the backyard, mangy, severely emaciated, covered in sores and tick bites, and shedding fur from malnutrition. Most of his teeth were gone. He weighed 60 pounds and was tied to a tree — and had been for the last four years. 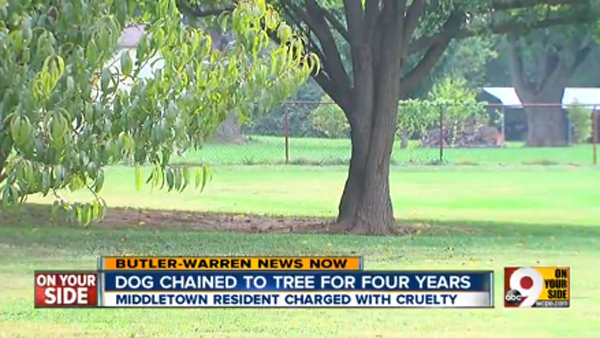 He was taken in by the nonprofit PAWS Adoption Center, who called it “the worst case of animal abuse” they had ever seen.

“When I gave him a bath, the blood just ran off of him,” Meg Melampy, a volunteer, told WCPO.

A neighbor who lives next door, Ron Allman, said that the Temple family once explained away the condition of the dog. “They told us that it was a disease that he had,” he said.

Allman also said that after Temple was arrested, someone in his family asked Allman to write a note saying that he never saw anyone mistreating the dog. Allman did so. 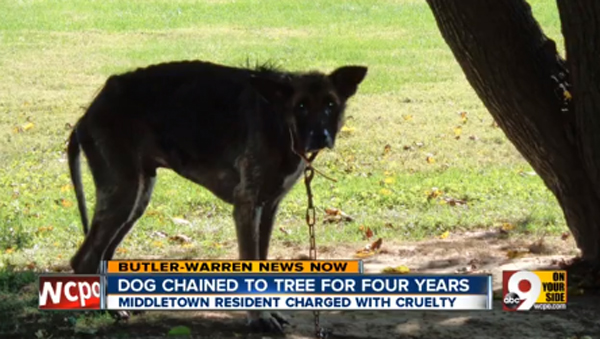 After more than $1,200 in treatment, the dog is “doing better these days” and is expected to make a full recovery. “He’s feeling a little better now, a little more perky,” West Chester veterinary clinic manager Michael Gigis told WCPO.

Once that happens, he’ll be put up for adoption. As for Temple, he’s out on bail and due in court Oct. 14. Let’s hope the sentence puts that $25 to shame.

One comment on “Unbelievable: An Ohio Man Tied His Dog to a Tree for Four Years”