Next on The Scoop: Dylan’s a Good Dog, But He’s Not Qualified to Run for Mayor

Michigan Humane Society staffers raise awareness of the dangers of leaving dogs outside in winter.

On Tuesday night, members of the Michigan Humane Society Cruelty Investigation and Rescue Department and emergency rescue teams slept outside to raise awareness of the dangers of leaving pets outside at night. They slept in doghouses, named in memory of dogs who had died in the cold this winter: Bella, Brandy, Brownie, and one simply titled “In Memory of All the Unnamed.”

“It’s been a really rough winter for dogs,” Debby MacDonald, chief cruelty investigator, told the Detroit News. “We’ve seen dogs frozen to death, dogs with hypothermia, and we don’t know if they’re going to make it. We’re doing this to raise awareness.”

The MHS Cruelty Investigation and Rescue Department responds to more than 10,000 calls every year for animals who have been abused and neglected or sick and injured. The hotline takes five to 10 calls on typical days, but that spikes to 30 or more during periods of cold weather. 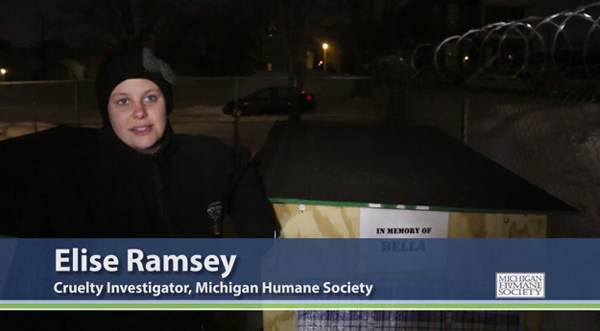 The four members who tucked themselves into the doghouses — Elise Ramsey, cruelty investigator; Stacy Bean, rescue driver; Chris Ouwerkerk; rescue driver; and Debby MacDonald — slept off and on during the night, according to YouTube videos made throughout their stay. They were bundled up in their own cold-weather gear, but they made nests out of bunches of straw. The effectiveness of the straw at keeping them warm seemed to surprise everyone. 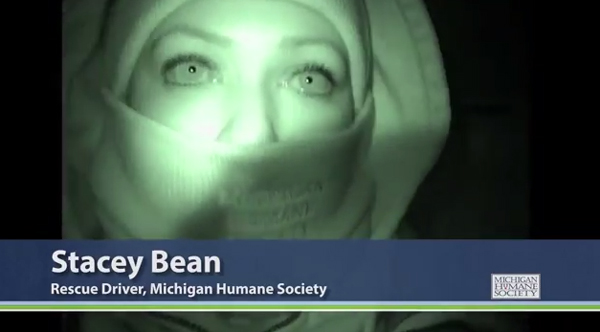 “You can tell when you’re up against the wall, if you don’t have the straw between you and the walls, the walls are cold,” MacDonald said at 2 a.m. between snatches of sleep. “You can really see how it keeps a dog warm and how it keeps them insulated. A dog in a bare dog house with wet frozen blankets would be really, really cold.” 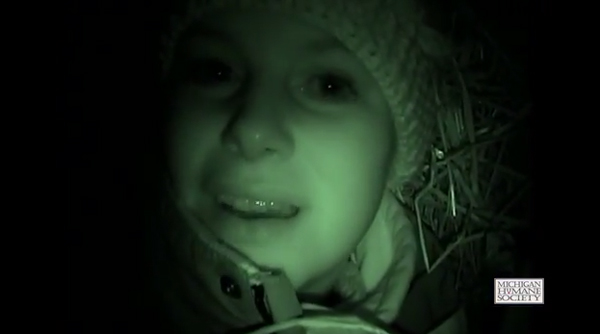 “It’s amazing to me that so many dogs survive the nights that they do with junky shelters and no straw,” said Ramsey.

However, the team used a lot of straw, stuffing the dog houses. They understand that many people don’t use nearly enough, just laying down a bed of straw instead of letting a dog tunnel in to make a nest. 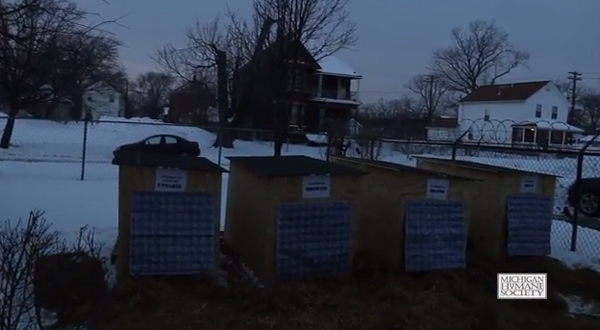 “Ideally you would stuff the doghouse almost completely with straw,” said a groggy Ramsay, “and just create a little nest for the dog to go into, turn around and plop down, so that’s he’s covered by straw and essentially stays warm.”

From her own doghouse, she listed three “really easy ways” to make doghouses better: keeping them off the ground, adding straw, and putting a flap on the door. 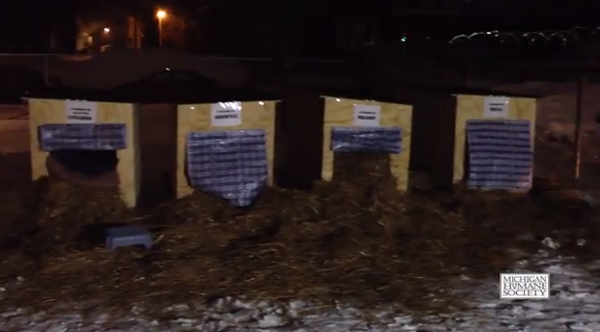 “Animals have lost their lives this winter that really didn’t need to,” said Ryan McTigue, spokesman for the Michigan Humane Society. “It’s sad because it’s one of those things where one is too many.”

Via the Detroit News