Next on The Scoop: How to Help Moses the Boxer, Found Starving and Traumatized

Fortunately, someone snapped a photo of the horrible act, and now the search is on for the dog and the owners.

We have no idea why people dump their dogs when they can simply surrender them at a shelter and at least give them a shot at a new home. Are they unaware that shelters will take their animals? Are they embarrassed? Are they just lazy?

At a Louisiana gas station yesterday, two men heartlessly dumped their dog, a black German Shepherd-Lab mix, speeding away as the dog raced after them on the road. Fortunately, a witness snapped a photo of the tragic event, and it’s getting passed around on social media. The dog has not been found yet — nor have the men — but with the publicity generated by the photo, we hope that will soon change.

“The first man told the dog to: ‘Go! Go over there!’ The man in the back of the pick-up proceeded to pull up the tail-gate of the truck,” she said in a statement from the Humane Society of Louisiana, according to CNN. “Appearing confused, the dog jumped up and put his paws on top of the tail-gate. The truck sped away, leaving the dog behind.”

The dog gave chase. Hollis got in her own car and followed as well. 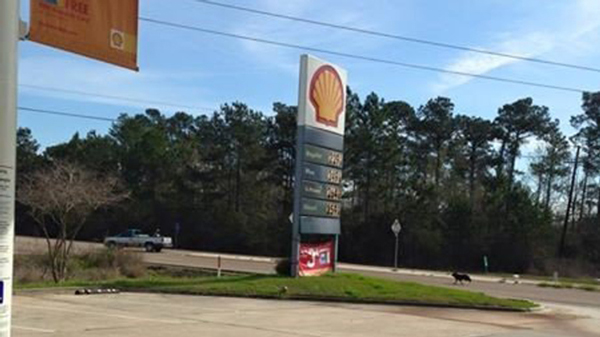 “The truck crossed over two lanes of traffic, and still the dog followed,” she said.

Eventually she lost the dog and the truck, but she had her photo. She posted it to Facebook, and then it appeared on the Humane Society of Louisiana Facebook page, where the group is offering a $350 reward for information leading to the arrest of the owner and the safe return of the dog. They’re also asking people to canvass the area where the dog was last seen. The truck is described as an old blue-and-white pickup truck, as you can see in the photo.

“If people feel they can no longer care for a pet, all they have to do is surrender him or her to a nearby rescue group or shelter, rather than abandon the poor animal at some random location, where their chances of survival are almost zero,” said Jeff Dorson, the director of the society. “This is truly a cowardly act and a punishable offense.”

“My heart is broken, and I am in shock that someone would treat a dog like this,” Hollis told the Humane Society.