Next on The Scoop: Cat Cafes Exist, So Why Not Open a Dog Cafe, One That Features Adoptable Pups?

Watch Lucky the Dog’s Wild Rescue From the L.A. River

After a fierce thunderstorm, the Corgi mix ended up in the Los Angeles river, traveling downstream at speeds of up to 20 mph.

Days after his dramatic rescue, LA Animal Services still doesn’t know much about Lucky. They know he’s a Welsh Corgi mix about six or seven years old. They know he once had a good home, given his nice manners. They also know he earned his name, having survived a wild trip bobbing down a rain-swollen river before rescuers got to him.

On Friday, a woman at Warner Bros. Studios in Burbank spotted his head bobbing above the suddenly rushing Los Angeles River, which was overflowing due to a thunderstorm. She called 911, while Lucky headed downriver, according to NBC Los Angeles. He traveled three miles at speeds up to 20 mph, making it to Glendale before firefighters got to him.

And they needed a helicopter to do it, with firefighter John Terrusa being lowered into the river to pluck out the dog.

The fire department describes the rescue in a press release:

A firefighter was carefully lowered from a LAFD helicopter into approximately five foot deep water moving up to 20 mph. The firefighter then hoisted the shivering dog out of the cold water. During the hoist, the rescuer and dog began to rapidly spin in circles, therefore they were carefully and briefly lowered back into the water to stop the spin, then safely raised and brought to the nearby concrete embankment where additional firefighters rendered immediate care.

“He was shaking, a little scared … but he was alive, nonetheless,” said a bystander who witnessed the rescue. “A lot of people were cheering, it was something to see.”

“It is definitely a loved animal,” said firefighter Terrus, who pulled the dog to safety. “It’s just one of those things where I’m sure the dog just got out of somebody’s yard and got in the wrong place, at the wrong time.”

After the pup made it safely to shore, he was taken to the North Central shelter in the LA Animal Services network.

“He is doing great, he has bounced back from his ordeal,” LA Animal Services Director Jan Selder said. “He is an awesome dog. He is potty trained, walks on a leash, and puts his head on your lap when you pet his head, which means he had a home.” 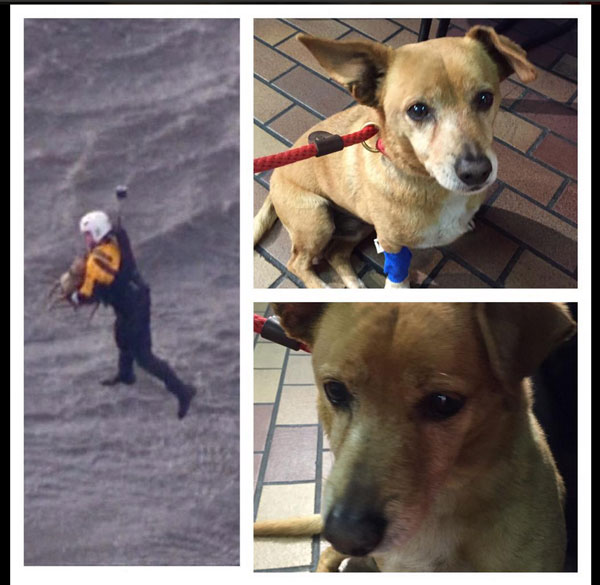 Anyone with any knowledge of the dog is encouraged to call the North Central Shelter at 888-452-7381.