Next on The Scoop: Not Again! U.K. Store Expels a Blind Woman and Her Guide Dog

Dogs Make It Better: A Chihuahua Rescues His Hospitalized Owner

Any hospital worth its mortar believes in the healing power of pets — that’s why you see so many therapy dogs padding down the hallways and into rooms, brightening the days of their occupants. But the nurses at a Kentucky hospital took that a step further. They tracked down and brought a man’s dog into his room after the frail, 73-year-old patient whispered to a nurse that he missed his dog. 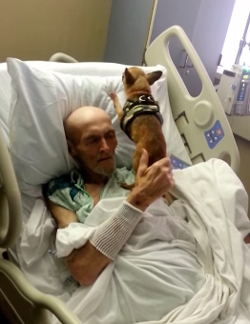 The results were stark.

The story is just as incredible as his recovery. The man, James Wathen, had been taken to the hospital weeks earlier and was not doing well; his dog, Bubba, missing an eye and his bottom row of teeth and with no one to care for him, was also taken away and placed in a shelter.

Nurses now believe Wathen fared so poorly in the hospital in part because he was mourning his dog. Incredibly, they believe the dog was doing the same thing. Both had stopped eating.

“The dog quit eating a week ago, which is very strange,” Smyth told Today.com. “The dog didn’t know where James was and James didn’t know where the dog was, and believe it or not, they both stopped eating at about the same time.”

Tracking down the dog, a Chihuahua, had proved to be a challenge. Phone calls finally revealed that Bubba went to the Knox-Whitley Animal Shelter and was then placed with a foster family. Concerned about Wathen’s condition, health care workers scrambled to get the dog OK’d for a visit. When they brought Bubba into the hospital, they knew they had done the right thing.; 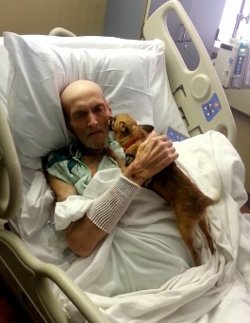 “He was so sad at first. We had him wrapped in a baby blanket and he was shivering,” Smyth said of the dog. “The minute we got about 20 steps from this guy’s room — I kid you not — his little head went up. His eyes got real bright and he was like a different dog.”

When Bubba and Wathen were reunited, Wathen “slowly perked up,” according to Today.com, during the half-hour visit. By the second visit, dog and owner had completely transformed, with Wathen sitting up in bed and talking, with his little dog scurrying around him.

“I hope this story will show to people the tremendous difference that animals can make in people’s lives,” Smyth told Today.com. “One of the biggest problems we face is the way some people think of animals. People just don’t see animals as creatures and beings, they see them as property.”

“I hope people understand they’re not ‘its,’ they’re ‘beings.’”