Next on The Scoop: 10 Dog Holidays That Actually Exist

Let’s Talk: It’s Your Dog’s Birthday Party — How Big Do You Go?

Do you go all out, with limos and theme parties and turkey-burger layer cakes? Or do you prefer a more mellow celebration?

This Friday, June 8 (or thereabouts), my dog, Jake, will be turning 10. It’s bittersweet, this change to two-digit age. It seems like he just walked in our door as a 6-month-old foster puppy rescued from a shelter, and now he’s considered well into his senior-citizenhood — or, to be polite, he’s an “older” dog.

Some people appear very surprised to hear his age. “Almost 10! He seems like a puppy!” they exclaim as they watch him zooming past at the beach, or rolling on his back in a grassy park meadow. Maybe they’re just being kind, ignoring the lipomas that make him a bit lumpy and craggy-looking depending on the angle. Still, it warms my heart to think this guy can pass for a puppy, or that it’s not so ridiculous for people to say that, even if they’re being nice. Now if we can only get him those 11 more years of life most Labrador puppies will have. 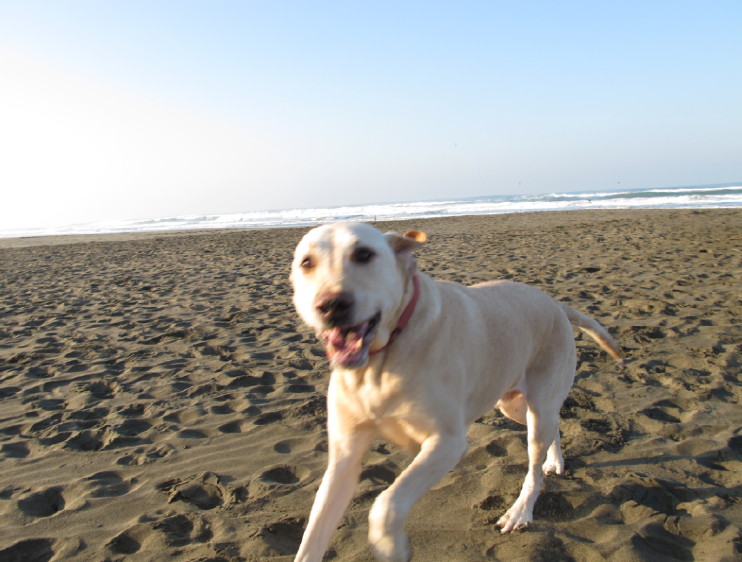 Jake’s birthdays have always been pretty low-key. We usually make a turkey-burger layer cake with mashed-potato frosting, and invite one of his canine pals over to have a slice or two. There are the inevitable candles one of the humans in attendance blows out, and we all clap as if Jake blew them out.

Sometimes we don silly party hats, and once he joined his friend Bella at a San Francisco sidewalk cafe. The humans ate a tasty dinner, and the dogs shared the cake. Well, Jake kind of dove right in while the diminutive, ladylike Bella looked on in dismay at his manners, as you can see. 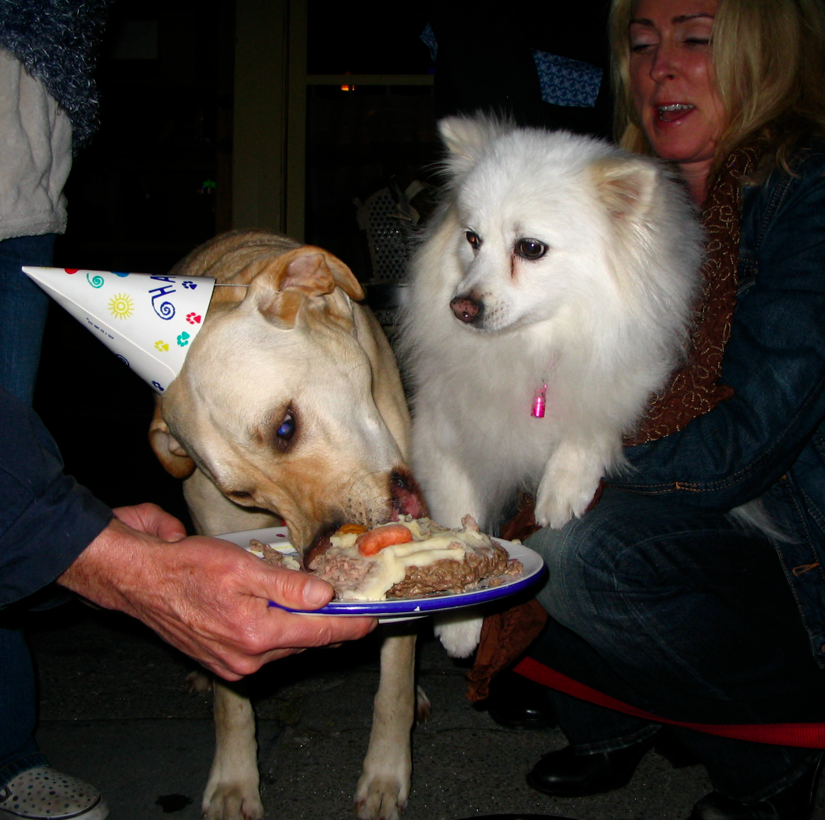 The rest of my family isn’t huge on birthday celebrations, so we keep Jake’s similarly mellow. But an acquaintance who lives in a chichi part of San Francisco couldn’t believe that a dog lover like me wouldn’t go all out for Jake’s birthday — especially for his forthcoming decade mark. “Jake will not ever see another decade celebration,” she said, shaking her blond bob in a “you will regret this one day” fashion.

She told me about a doggy party planner who made her little terrier’s seventh birthday a “smash hit.” She gushed about the event. “Sabrina had twenty of her best doggy friends at the park, and it was the most magical, fun party you’ve ever seen! Everyone came in costume!” Er, I guess Jake’s invite got lost in the mail …

This woman is not alone in her high-end doggy birthday bashes. Some dogs-only doggy bakeries welcome fancy pooch parties, and serve tasty morsels on tables topped with crisp white tablecloths. And dog party planners are starting to become less rare. Some will even arrange for a limo ride for Fifi and all her furry friends.

That’s not my style. But if you want to go all out for your dog, there’s no harm in that. If it makes you happy, it’ll probably make your dog happy. (Although not too many dogs in my circle care about starched white tablecloths …)

So we ask: How do you celebrate your dog’s birthday? Do you even acknowledge it? Do you have a mellow celebration or a major fete? And, just curious: What kind of celebration would you have for Jake’s 10th birthday, if he were your dog? Let us know in the comments!