Next on The Scoop: Poisoned Meat Gets Left on the Street Again, This Time in Arlington, Virginia

Dog Abandoned on Phoenix Curb With Couch When Owner Moves

The Pit Bull was dumped with the trash, and he sat there all day until animal control rescued him.

On Wednesday of last week, a neighbor spotted a moving van outside a home on 43rd Avenue and Cactus Road in Phoenix. On Thursday, after coming home from work, she saw a couch on the curb outside the home. And on the couch, a dog. A Pit Bull, looking very forlorn and lost. 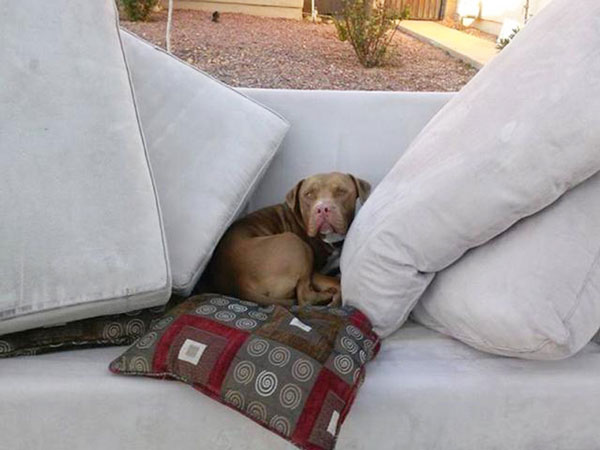 She also noticed that she had new neighbors, who had moved in during the day. She found out from them that the dog had been out there on the couch all day. The neighbor was shocked; she took a picture and posted it to Facebook.

“I guess the old owners had left him there,” she told ABC15.

The picture went viral, and the neighbor, trying to figure out what to do with the dog, ended up calling Maricopa County Animal Care and Control, who came and picked up the three year old.

“Some of our volunteers brought the Facebook photo to my attention,” Melissa Gable of Maricopa County Animal Care and Control, told People. “This was [taken outside] the dog’s house, and that was a couch that the owner had discarded. The more we heard from people in the area, we realized it was true –- that he had just been dumped, abandoned.”

Gable had seen the picture on Facebook as well.

“When I saw it, I almost cried. It’s this picture of this dog, and he looks so pitiful and tiny,” she told ABC 15.

Animal Control is working with the Phoenix police, relaying information from people who call about the dog. The owner could face animal cruelty charges, and the case is under investigation.

As for the dog, he is doing fine and has been been transferred to the Arizona Humane Society. Gable is confident the dog will find a good home. “We’ve been inundated with calls — rescue groups and people who want to step up and help,” she said.

“On Thursday when he came in, he was pretty scared, he didn’t want to come inside [from the outdoor dog run],” she told People. “But by Saturday, he was inside, tail wagging, eating treats. Really a sweet dog.”

Via ABC 15 and People