Next on The Scoop: Money Talks at the Westminster Dog Show — or Does It?

After Jazzie gets trapped in a muddy ditch, Razor sounds the alarm until someone finally responds -- 18 hours later.

Score one for the little guys.

This tale from Belen, New Mexico, is all about role reversal. Generally, when one combines a rescue mission with a Saint Bernard, it is the big dog helping out. This time, is was Jazzie a 180-pound Saint Bernard who was in desperate need of a rescue. And leading the charge to save the day was her good friend, Razor. A Dachshund.

Turns out, according to the Albuquerque Journal, that Razor and Jazzie are brother and sister, owned by a carpenter in Belen named Tim Chavez.

Last week, Razor, Jazzie and a Pit Bull named Layla escaped their yard. It quickly went from bad to worse for Jazzie, who got herself trapped in a muddy ditch and could not get out. That’s when Razor went to work.

The little Dachshund returned to the family home and for the next 18 hours did everything in his power to alert someone — anyone — that poor Jazzie was in trouble. 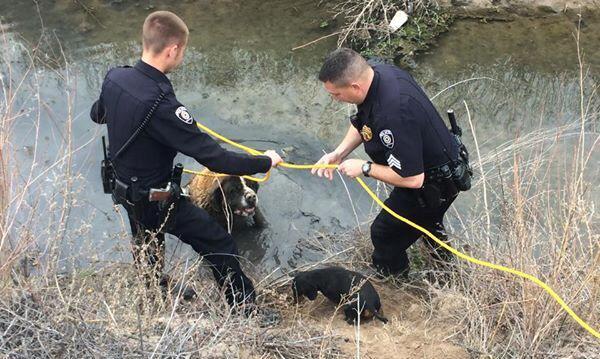 “I woke up the next morning and expected to see Jazzie and Layla in the yard, but Razor was still the only one out there. So I went out to feed him, and this time Razor wouldn’t go to his bowl,” Chavez told the Journal. “Instead, he was really excited and was running around and kicking up dust and barking. I guess he was trying to alert me, but obviously I didn’t see that.”

After Chavez left for work, the plea not heard, Razor moved on to the next human he saw, trying to alert a friend of Chavez’s, who came to the house to see if Jazzie and Layla had returned. All the friend found was Razor, who was still sounding the alarm.

But once again, the message got lost in translation.

The neighbor, Chavez said, “told Razor to quit barking and go back inside the yard.”

Instead, Razor went to plan B, running off across a field and back to the ditch where Jazzie remained stuck in two feet of mud, now closing in on 18 hours.

A passing motorist near the ditch heard Razor’s barking, looked down and saw Razor looking after Jazzie. The driver called 911 and Belen Police and Fire arrived to make the big save.

Valencia County Animal Control took Razor to the local shelter, while Jazzie was taken to an animal hospital, where she was treated for hypothermia and exhaustion, but was expected to recover completely.

By coincidence, Chavez’s nephew, Jace, who had seen Tim’s Facebook post about the lost animals, was at the animal hospital with a sick cat when the Animal Control arrived with Jazzie.

Jace Chavez called his uncle to tell him that Jazzie had been found.

“I was extremely relieved and dropped what I was doing and headed to the hospital immediately, like you would do with any family member,” Tim Chavez said.

As for Razor, a hero’s work is never done. He will be singled out with a hero’s award during the next Belen City Council meeting on March 2.

“It’s never happened in my career, and in this business, we see a lot of things. This is the first time that we participated in something like this,” Garcia, told local TV station KRQE. “This is a great story. One I think that is very unique, and one that animal lovers across our state will love.”

Via Albuquerque Journal and KRQE