Next on The Scoop: 10 Valentine’s Day Gifts for the Pupster in Your Life

A Photo of a Police Officer and His Five White, Deaf Dogs Goes Viral

Four of the five dogs adopted by Mac Adams of Richmond, Virginia, are Pit Bull mixes.

It feels sometimes like whenever I write up a Dogster piece that features cops, it involves a trigger-happy officer shooting down someone’s over-exuberant dog. You might even say it’s my thing here at Dogster HQ.

So, just to show that I’m not totally routine and predictable, here’s a pleasant change. This photo of Richmond, Virginia, police officer Mac Adams showing off his five dogs has recently become very popular on the Internet, even going so far as to do that thing that I’m told the kids call “going viral.”

The dogs, Pickles, Nea, Piglet, Opal, and Mortime, are beautiful, but what makes them noteworthy isn’t their color or breed: It’s that they’re all deaf.

Officer Adams’ interest in deaf dogs began in 2010, about a year after his pet Mastiff had died. A friend who worked at the Richmond Animal Care and Control had tipped him off to a dog there in need of a home: a deaf, white female Pit Bull mix. That dog was Pickles, and when Adams saw her, it was love at first sight. He couldn’t let her languish in the shelter without a home, as so many dogs with deafness or other disabilities do.

“She was just so cute that I couldn’t let that happen to her,” he told the Richmond Times-Dispatch. Adams had no experience with deaf dogs, but “I was just like, ‘We’ll figure this out.’ ” 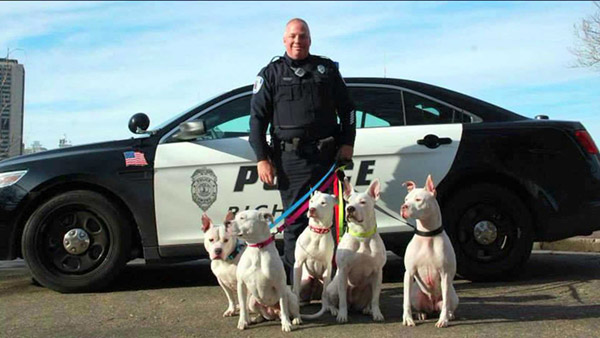 Adams and his family figured it out so well they added four more white, deaf dogs to their household.

The fact that all are white, and all are deaf is not an accident. The AKC Canine Health Foundation’s site says, “Dogs with white or merle coats are predisposed to congenital deafness. Most of the dog breeds who suffer from congenital deafness have some white pigmentation in their coats.” Breeds that commonly have the gene that causes deafness and white coats include Pit Bulls, Dalmatians, and Boxers. Four of the Adams’ dogs are Pit Bull mixes.

Adams says that their deafness makes them “Velcro dogs.”

The picture was posted as part of a larger photo gallery showing Richmond Police Department officers with their pets, including birds, chickens, hamsters, and even miniature donkeys. Spokeswoman Dionne Waugh said “We just wanted to put a human face on our officers.”

As of yesterday, the photo of officer Adams had gotten more than 1.2 million views internationally. And to top it all off, the group Deaf Dogs Rock has named Adams to its board so that he can help spread the word that dogs who can’t hear can still be great family members.

One comment on “A Photo of a Police Officer and His Five White, Deaf Dogs Goes Viral”