Next on The Scoop: How Artist Lili Chin’s Dog Inspired Her Career in Positive Training

Vid We Love: Watch a Chihuahua Play Fetch the Cat

It's one thing to teach your dog to fetch a ball or a Frisbee, but this video showing a dog fetching the cat is both strange and adorable.

Getting dogs to fetch stuff is a lot of fun. There’s hours of enjoyment possible in throwing a ball or a Frisbee and watching your pooch go after it with delight, happy to bring it right back to you. Certain cartoons assure me that it’s even possible to train your dog to fetch your newspaper while you relax in an easy chair. However, I’ve yet to see it done, and in this non-paper-oriented day and age, you run the risk of having teeth marks left in a very expensive piece of electronics. 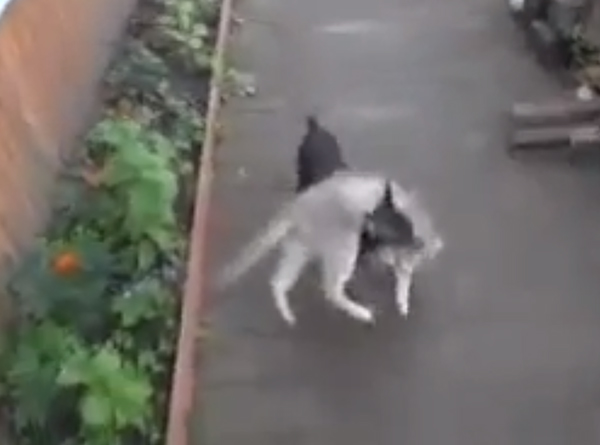 All that being said about the virtues of having dogs fetch stuff, here’s something I never thought of: Training your dog to fetch the cat. But apparently someone did, and it’s pretty adorable.

The video below is only 40 seconds long, and it’s all in Russian, but it’s definitely charming enough — and strange enough — to add a pleasant little lift to your day when coffee and loud music just aren’t doing the trick.

The thing that I like best is that it’s a Chihuahua doing the fetching. The dog is only barely larger than the cat that he’s supposed to retrieve. If it were a German Shepherd or some other large breed, it wouldn’t be quite so surprising; you could imagine the dog bending down and picking the cat up by the nape of the neck or something. What the little Chihuahua does instead is quite ingenious: He just ducks under the cat and carries it on his shoulders like a furry sack of kibble.

The cat looks like little more than a kitten, which makes me wonder what will happen if the dog tries to pull the fetching trick in a few months or years. I don’t know many adult cats who will put up with being taken any place they don’t wanna go, especially by a dog.