Next on The Scoop: Should Rosie the Chihuahua Enter an Ugly Dog Contest?

Breed-Specific Legislation Is Banned in Massachusetts

Finally, some good news on breed-specific legislation — namely, Massachusetts has banned it. That’s right, banned it. It’s the first sensible thing we’ve heard on the subject in recent months, what with the recent death of Lennox in Northern Ireland — who was killed just because he looked like a Pit Bull — while a real Pit Bull named Dre faces a death sentence in Colorado when he has hurt no one.

Massachusetts Gov. Deval Patrick signed a bill on Thursday that states “No city or town shall regulate dogs in a manner that is specific to breed,” according to South Coast Today. The law further states “no dog shall be deemed dangerous … based upon the breed of such dog.”

It’s part of a broader law, which has been worked on for six years, to reform animal control. It establishes a spay-and-neuter program for Massachusetts and imposes training requirements for animal control officers, among other things.

One backer of the law described the nonsense behind targeting specific breeds — such as Pit Bulls — in law.

Amen! Let’s elect more lawmakers like Montigny! We can start with the Colorado legislature and the Belfast City Council! 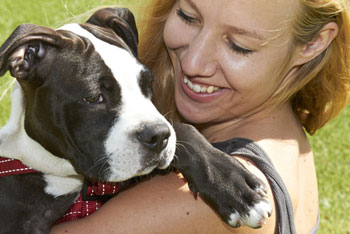 Other backers of the law included animal advocacy groups and people who work in animal control.

“I’ve been bitten twice since I’ve been on the job and both were Pomeranians,” North Attleboro animal control officer Karen Fontneau told The Sun Chronicle. “Each case will be an individual case.”

The Massachusetts law includes another provision that we find remarkable: It extends restraining orders in domestic-violence cases to include pets as well as human family members. So that means dogs, cats, and other animals can be kept safe from abusers who might otherwise use the pets to get back at family members who’ve taken action. It will also let people escaping abusive situations take pets with them.

“We heard horrendous stories of pets being abused or used as leverage in custody or divorce cases,” Sen. Montigny told South Coast Today.

One law-enforcement official praised this part of the law.

“As a police officer, I like the fact they included domestic violence protection in the bill,” Joe Magnani told MetroWest Daily News. “This bill will help us handle pets when we report to a domestic violence call.”

The law also bans the use of carbon monoxide and carbon dioxide to euthanize animals.

Helping develop the bill were groups including the Animal Control Officers Association of Massachusetts, the Massachusetts Society for the Prevention of Cruelty to Animals, and the Animal Rescue League of Boston.

A 5-week-old kitten sat alongside the governor as he signed the bill. One of the law’s backers, Democratic state Sen. Karen Spilka of Ashland, brought her dog, Sienna, to the ceremonly.

It was Sienna’s 15th birthday.