Next on The Scoop: Mia the Australian Shepherd Can Read — And She’s Not the Only Dog Who Can

Dogs are using the piles to escape their yards, which has area police issuing warnings to owners.

The Boston area set an inglorious record on Thursday. With two-tenths of an inch, the city reached exactly 102 inches for this winter, which is the second-highest amount in recorded history, just 5.6 inches behind the all-time mark set in 1995-96.

But that’s not the incredible part. If you only counted the 89.4 inches of snow that fell in the region between Jan. 25 and Feb. 26 — a span of just 33 days — it would still be the fourth-highest amount of snow in Boston for an entire winter. And because February is also going into the books as the second-coldest February in Boston’s recorded history, all that snow hasn’t gone anywhere — and won’t be anytime soon. 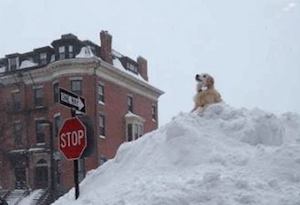 And that means piles, lots and lots of piles. There have already been numerous roof collapses across the region, but another distressful phenomenon is taking place: The dogs of Boston are getting loose.

Last week, I shared with you the time-honored winter tradition of shoveling the PTP (Path to Poop) for our dog in the backyard, a process that continued on Thursday with some path touch-ups. That same backyard now features a snow pile large enough to host skiing at the Winter Olympics.

And that part of the story is getting serious and dangerous for dogs. We’ve already discussed the effects of extreme cold on dogs, and the backyard piles have become so tall and increasingly packed solid that dogs are now able, with little difficulty, to scale the small mountains that dwarf fence-tops to escape from the safety of their backyards.

This is leading to a greater risk for hit-and-runs, as the accumulated piles continue to obscure most driveway openings and street intersections, making quick braking near impossible when trying to avoid hitting a car, person, or animal suddenly darting into a moving car’s path.

The world got a shocking and horrifying reminder of what else can happen when dogs wander away from home, with this disturbing story out of North Texas, in which a firefighter shot his neighbor’s dogs to death — and posted pictures of the carnage on his Facebook page — after the dogs wandered onto his property.

The escaping-dog problem has become so acute in Weymouth, Mass., about 15 miles south of Boston, that the local police issued a warning on its Facebook page Wednesday:

“Please watch your dogs. We have been dealing with a large number of dogs that are running the streets. Most of them are getting out of yards that are usually secure because of snow banks. Please leash your dog or tether them when they are out. When your dog gets out, the only place they have to go due to the snow is in the street. When this happens, your dog is being put at risk of getting hit by a vehicle.

“Besides putting them at risk of getting hit by a vehicle or having an encounter with wildlife, they could be picked up by us. If your dog is picked up on the street and doesn’t have a valid license tag and rabies tag, we don’t know where they belong. This means your dog will be taken to a shelter. If this happens, most dogs will become stressed out being with unfamiliar people, placed in an unfamiliar vehicle, and being housed in an unfamiliar place. Save your dog and yourself the stress, keep your eyes on them.”