Next on The Scoop: You Can Now “Bury” Your Pet in Outer Space — For a Price

This Bonehead Drove With His Dog Tied to a Trailer

The picture is shocking, and hundreds of people on social media thought so as well. It shows a dog on a trailer, being motored down a road in Tennessee. But look closely and you’ll see the dog appears to be nearly hog-tied to the metal bars. Animal cruelty? Well, maybe not in Tennessee. 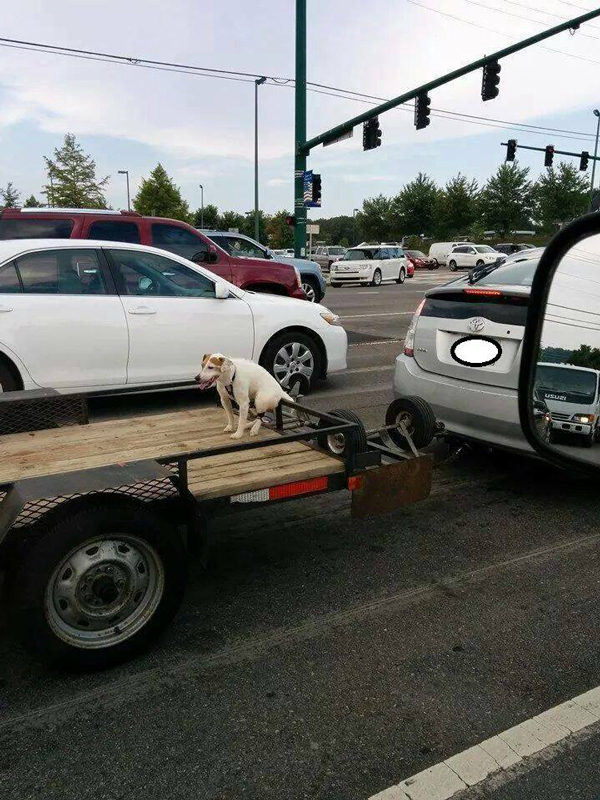 But let’s back up. First, it’s difficult to comprehend what’s happening here. Did someone really tie a dog to a trailer instead of merely putting him in his — what’s that? — a Prius? Did someone really need to tie the dog that tight? The scenario seems insane any way you look at it.

WBIR shared the photo on its Facebook page, and people were justifiably outraged, so outraged that the Knox County Sheriff’s Office got wind of the photo. To its credit, the office decided to investigate.

“We look at how an animal is being transported,” said Martha Dooley, Knox County Sheriff’s Office spokesperson, “[whether] it is injuring the animal in any way and also how an animal is restrained. Is that causing pain or injury?”

According to WBIR, deputies got the man’s license plate from the photo and went to his home to ask him questions. Fortunately, it appears the dog was not hog-tied, but rather he had gotten tangled up in his leash. Unfortunately, the dog was indeed being transported on a trailer.

“He says the dog was tangled up in the leash with his back legs, and as soon as he saw that, he untangled him, but yet left him on the trailer and continued on home,” Dooley said.

The man defended himself to police, saying his dog was in the car and was whining, so he put him on the trailer. Another photo shows the man heading back to his car after untangling the dog. 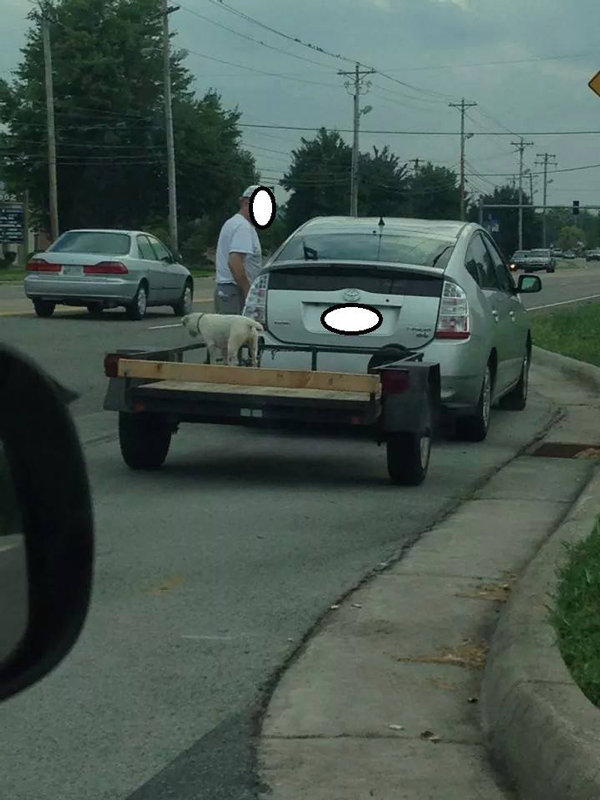 Police are still investigating, but because Tennessee has no law against transporting dogs on trailers or in the backs of pickup trucks, there might not be anything it can do. WBIR notes that the dog was not harmed, and the animal had clean water and food at home.

WBIR contacted the family and received this statement:

We agree that placing the dog on the trailer was not the best choice. However, the pictures posted do not show an accurate representation of the events. The dog was thought to be secured safely and at no time was “hog tied” and was being watched by the driver. At no time was the dog ever harmed. It is very concerning to our family of the multiple postings of threats of verbal and physical attacks along with identifying the address of where they live. Our family loves all of our animals and we believe the safety of an elderly couple is also a great concern.

What do you think about all this? Let us know in the comments.