Next on The Scoop: The Jerky Treat Problem Needs More Than a “Natural” Solution

See the video of the Dachshund on wheels at the recent Wiener Dog Races near Seattle.

Last week, a video appeared of a Dachshund in a wheelchair running in Seattle’s Star 101.5 Wiener Dog Races at Emerald Downs on July 13. The dog, a female, is called Anderson Pooper, a name which is … well, it’s just beautiful.

What’s notable here is not how Anderson Pooper just runs — many dogs in wheelchairs run — but how she gives it all she’s got, like she’s reporting in Kabul under enemy fire and has to race across town to get to the only decent espresso in town. Pooper runs, head bobbing, wheels churning, maintaining a bullet’s path to the finish line — dead true — while beating all those dogs who just ran all over the place like idiots. Anderson Pooper is no idiot. The roar of the crowd fires her up. She sees her mom. She sets her course and floors it, like she’s reporting on a hurricane in Florida and has to get to a hairdryer.

She gets to the hairdryer. 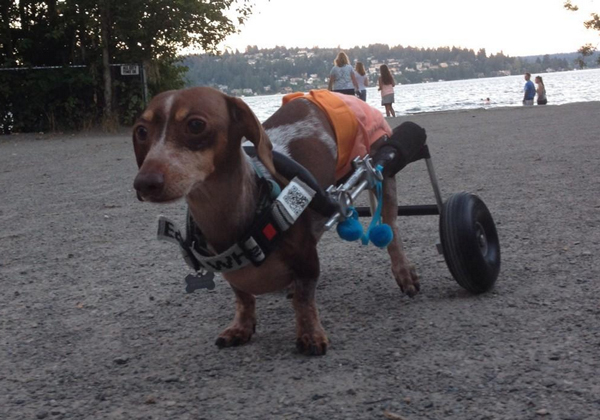 Dave and Brenda Sizer, who own the wiener dog, say Anderson Pooper has a spinal injury, and they adopted the dog four years ago and dedicated themselves to her care.

As for her name, it’s a heartwarming story. One day, according to the Daily Mail, Brenda remarked “how the dog was a big pooper.” Dave, being a caring husband, decided that was a fine name — Pooper. Then, because he is a gentleman, he added his wife’s maiden name to it, and Anderson Pooper was born.

Back to her running:

“She loves running. Any chance she gets she’s all in for it,” he said. “We’ll take her to the coast, and she’ll run on the beach and we have a hard time keeping up with her.” 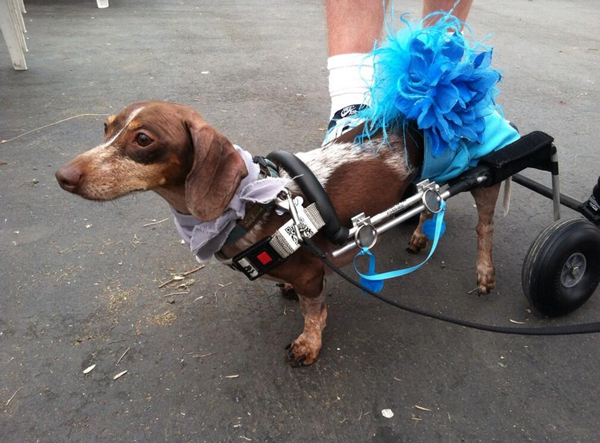 Dave said this was Pooper’s first race, and that she got off to a poor start because of mud on the track, but the Sizers expect her to race more.

“A lot of times people see her and go ‘Awww, poor thing,'” he said. “We always say ‘Don’t feel sorry for her. She couldn’t care less her legs don’t work. She’s as happy as she could be.'”

You can donate to Anderson Pooper’s nonprofit organization here, and you can also visit her on Twitter.

Via the Daily Mail; photos via her Twitter page