Next on The Scoop: So, Your Dog Has Canine Cancer — Here’s What to do Next
Good Advice 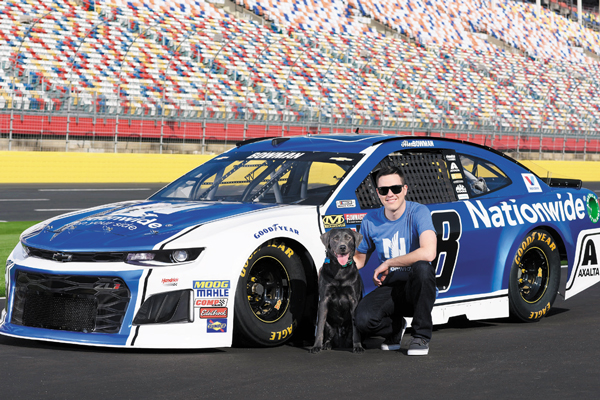 Alex Bowman is famous for being an outstanding NASCAR driver but do you know about his canine crew of two: Roscoe and Finn?

NASCAR driver Alex Bowman took over as full-time driver of the No. 88 Nationwide Chevy Camaro ZL1 for the 2018 season. Not only is Alex an amazing driver, he’s a huge dog person, too.

A few months ago, I had the opportunity to chat with Alex about his racing and, of course, his dogs. His current canine crew of two started with Roscoe, who’s now 5. While driving for a team based out of Concord, North Carolina, Alex decided he needed a dog. Luckily, the local humane society was just five minutes away, and Alex adopted baby Roscoe.

However, Roscoe turned out to be a bit of a challenge. “At home, he’s awesome — super well-behaved,” Alex says. The problem with Roscoe is that he hates all other dogs. Adopting Finn, now 2, was an attempt to get Roscoe to be better around other dogs. And it worked. The two are best buddies, and Roscoe tends to be very protective of Finn — which is amusing, as Finn weighs about 90 pounds and Roscoe only 40.

When he’s not on the road, so to speak, Alex enjoys spending time with the dogs — even when they “punch him in the face at 6:45 a.m. because they want food.” They hang out with Alex at the gym ­— although Alex points out that they make his productivity go way down. They also enjoy keeping Alex company at his shop, but that can sometimes be problematic: “They’re vacuum cleaners — they’ll eat whatever they can find,” he says.

Roscoe and Finn adore Alex’s girlfriend, Emily. “If we walk in the door together, they don’t even care that I’m there,” Alex says. “They’re just glad to see her.” Emily often takes care of the dogs while Alex is away. And they make Alex appreciate going home and his time off even more. “They’re calming,” he says. “They don’t care how my race went. They’re just happy to see me.”

Learn more about Alex (and Roscoe and Finn!): @AlexBowman88 and @Nationwide88.

One comment on “Alex Bowman: An Amazing NASCAR Driver and Dog Lover”