Next on The Scoop: 6 Dog-Friendly Companies to Work For
Dogster News 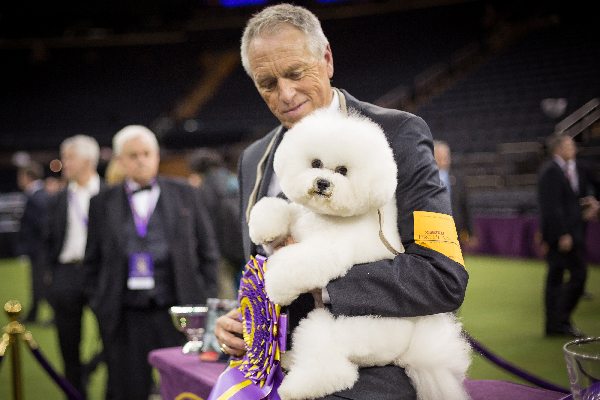 Over two days, nearly 2,900 dogs were whittled down to a lineup of seven finalists, each a leader in his or her respective Group. New York City can be outrageously expensive to visit and attempting to drive or fly there in wintry February adds to the challenge, yet the Westminster Kennel Club has been hosting the most prestigious dog show in America for 142 years now. It is the second-oldest sporting event in the country, and the Kentucky Derby beats it by only one year. Despite the weather and the expense, the diehards always get there for there is only one Westminster. 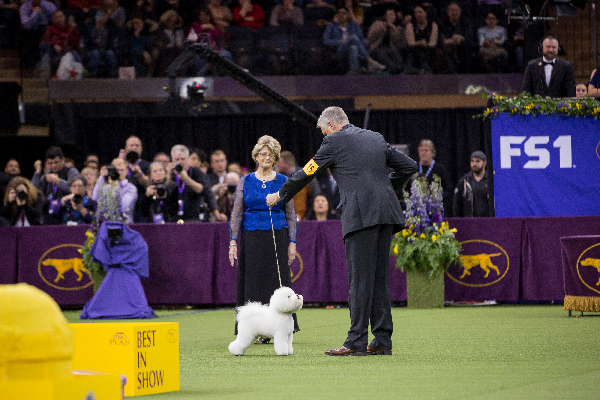 Best in Show winner Flynn with his handler, Bill McFadden, and the judge, Betty-Anne Stenmark. Photography by Kayla Bertagnolli.

Betty-Anne Stenmark of Woodside, Calif., an arbiter respected ‘round the world, was the judge tasked with evaluating the glorious Group winners and selecting a Best in Show this year.

After carefully examining and moving each of the finalists, she chose the powerful and stately ‘Ty,’ the jet-black Giant Schnauzer, as her Reserve Best in Show. Ty came into the competition with the most impressive credentials, having attained No. 1 dog all breeds status in 2017.

Ms. Stenmark selected the sparkling Bichon Frisé ‘Flynn’ for Best in Show, thrilling his breeders, owners and elated handler, Bill McFadden. Flynn is only the second Bichon to have ever gone Best in Show at the Garden. The first was ‘J.R.,’ Champion Special Times Just Right, back in 2001.

Best in Show was announced shortly before midnight on Tuesday. While the floor of Madison Square Garden was quickly swarmed by photographers and media, with a celebratory party to follow that lasted into the wee hours, the VIP treatment for Flynn was only beginning. After all, an event with 142 years of history behind it demands suitable fanfare.

On Wednesday morning, Flynn did the round of the New York morning talk shows. For lunch, every Best in Show winner enjoys a steak served up on a silver platter at the storied Sardi’s restaurant. The walls here are covered in Hirschfeld caricatures of the entertainment world’s greatest stars. It’s where Broadway royalty has gathered on opening night to read the reviews, a tradition famous enough that it has been depicted in many films over many decades.

More fun followed. Speaking of Broadway, Flynn and Bill hit the Great White Way, where they did a walk-on for the smash musical Kinky Boots, Bill proudly carrying Flynn’s glorious Best in Show rosette. Flynn’s Broadway turn was especially appropriate since his registered name is Grand Champion Belle Creek’s All I Care About Is Love, which is a song from the famous Kander & Ebb musical Chicago, and sung by the show’s lead character, Billy Flynn. How perfect that there is a name association for both Bill McFadden and Flynn the Bichon.

Finally, before flying home to Northern California, Flynn and Bill got to ring the bell at the New York Stock Exchange. They probably could have flown home on Cloud Nine, but we’re told they agreed to more mundane aircraft, very tired but very happy.