Next on The Scoop: A Dog Trainer Answers the Question: What Makes a Dog “Good” or “Bad”?
In the News

Here’s a Man With a Mission: To Name Dogs and Buy Kickstarter

Aaron Schlecter wants to raise $3,700 to help him professionally name dogs and write about it. Also, he'd like $1.2 billion so he can buy Kickstarter.

While Kickstarter and its crowdfunding cousins have helped launch a lot of interesting projects that might otherwise have languished in oblivion, they’ve also provided a platform for the weird and the wasteful. The most infamous example of the latter happened last September, when Ohio resident Zack Brown managed to raise $55,000 to make a potato salad.

Brown’s Kickstarter began as a joke, but the really weird ones aren’t joking. Aaron Schlechter seems to be trying to raise the bar on absurd crowdfunding projects. Schlechter thinks that he has a gift for naming dogs. He also thinks that a lot of people are in desperate need of his gift, because they keep on giving their dogs lousy names. 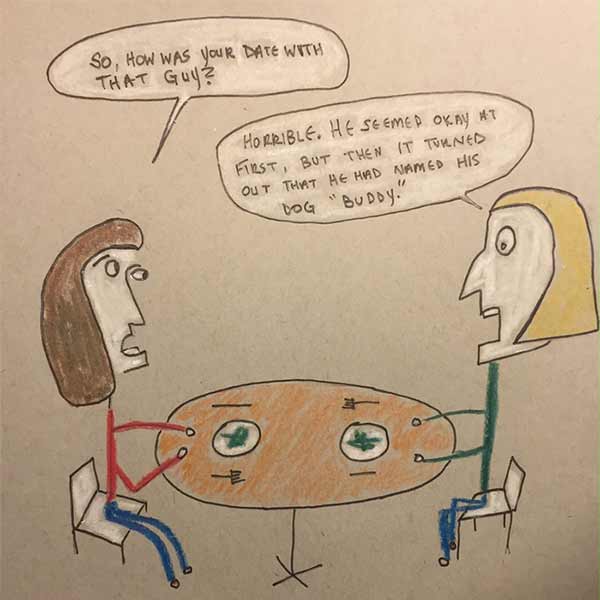 Apparently the social consequences of giving your dog the wrong name are dire indeed. (Via Kickstarter)

So, he started a Kickstarter campaign that would allow him to promote his skill and name dogs for money. As he saw it, this was a great humanitarian venture. “Don’t die alone just because you’re terrible at naming dogs and people are constantly judging you because of it,” his Kickstarter page says. “Let me name your dog.”

How Schlecter imagines the process working. (Via Kickstarter)

Unfortunately for Schlechter, it turns out that Kickstarter does have some standards about what you can do on their site, and it shut down his campaign. Not because the campaign was silly, but because it failed to meet the first qualification of Kickstarter’s guidelines. At the end of your campaign, you have to actually create something:

Kickstarter can be used to create all sorts of things: art and gadgets, events and spaces, ideas and experiences. But every project needs a plan for creating something and sharing it with the world. At some point, the creator should be able to say: “It’s finished. Here’s what we created. Enjoy!”

So, Schlechter had to tweak his campaign a little bit to focus on producing a book about naming dogs. In his original campaign, the book was just something that he might get around to someday if he had the time/inclination. Now, it’s the primary goal. 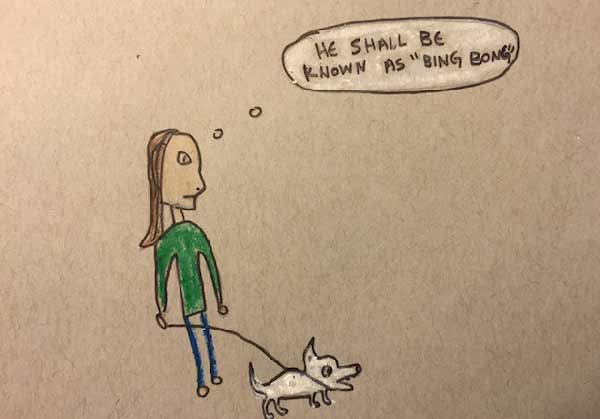 But Schlechter has a new goal now, too. Thanks to Kickstarter’s lack of appreciation for his dog-naming mission, he thinks that the whole company needs a change. His goal to produce the book is $3,700. But if he raises more than that — if he can extend his fundraising to $1.2 billion, he wants to buy Kickstarter outright and make it into a dog-naming site. According to him, it should be easy:

If I raise $1,200,000,000, however, I plan to buy Kickstarter and amend its rules so only projects related to the naming of dogs will be allowed on this site. That may seem like a stretch, but think about it–if only one out of every six people on earth donates $1 for me to name their dog “Donald” then we’re in business.

Well, only 1 in 6 people out of the entire planet. That should be a snap, then. 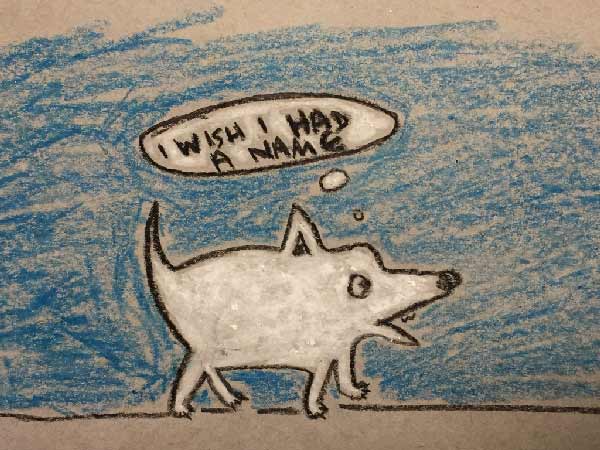 If these are the illustrations that are going to be included in Schlecter’s book, he might want to consider outsourcing. (Via Kickstarter)

Of course, the question immediately comes to mind: If Schlechter is such a genius at naming dogs, why in the world is “Donald” his ideal choice for 1.2 billion dogs? Even considering that that’s the cheapie option, it doesn’t seem terribly original, especially when you consider the allegedly dire consequences of giving your dog the wrong name. According to Schlechter:

If you name a dog the wrong name it’s not just you that has to deal with the consequences. Your poor dog will have to too. Its feelings are going to be hurt terribly like a bee that stings a person that it thinks is a threat to the hive it lives in on and off, only to realize that that person was actually bringing all the bees Capri Sun and orange wedges and that the kind-hearted soul is now going to die of anaphylactic shock because they accidentally took a sharpie with them that morning instead of their epinephrine pen and the bee is going to die too because that’s what happens to bees when they sting. Yeah. Terribly. You don’t want that on your conscience, do you? I don’t want it on your conscience. So let me name your dog.

In some ways, I stand in awe of Schlechter, or at least his prose. Some of the passages make me long for the coherent, well-composed text on a bottle of Dr. Bronner’s Soap.

There seems to be little chance that either the book or Schlecter’s planned corporate takeover will happen. As of right now, he has $575 pledged out of $3,700. Granted, there are still 23 days left, but at this rate, he’s not going to be crossing the billion mark — or even the million mark — any time soon.

If you feel tempted to help out, whether out of pity or a sense of absurdity, or just because you want your dog to be officially named Donald, here’s some advice: Don’t. Just don’t.

Via Mashable and Kickstarter