Next on The Scoop: Recipe: Witchy Finger Snacks
Breeds 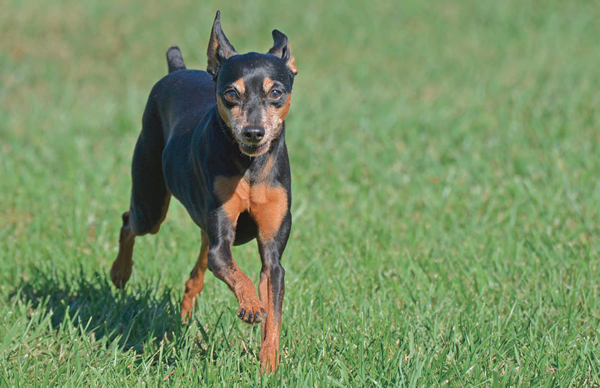 1. Dispelling the biggest myth
Despite the “Miniature” in his name, the Min Pin is not a scaled-down version of anything, most particularly the Doberman Pinscher. Both the Doberman and the Min Pin probably descended from the old German Standard Pinscher, which is believed by many to be the ancestor of several German breeds. But there the relationship ends. The Miniature Pinscher significantly predates the Doberman. While dogs similar in appearance to the Min Pin are seen in some artwork dating back to the 1700s, Herr Louis Dobermann did not breed his first true Doberman Pinscher until 1890.

2. The Min Pin’s roots
Historians concur that the Miniature Pinscher originated in Germany as an effective barnyard ratter. The German Kennel Club calls the “Zwerg or Dwarf Pinscher … a pure German breed from olden times that has nothing to do with the Doberman or the Manchester Terrier.” In 1836 Dr. H.G. Reichenbach, a German writer, stated that the breed was a cross between the Dachshund and the Italian Greyhound. Many historians agree that the Min Pin’s ancestors most likely include a combination of the smaller, German Smooth-haired Pinschers, the Italian Greyhound and the Smooth Dachshund. The breed was popular in Europe until World War I, when numbers began to decline. Fortunately for the breed, it was imported into the United States around 1919. The first one was registered with the American Kennel Club in 1925 under the breed name Pinscher (Toy).

No one would call the diminutive, curious, spirited and funny Min Pin a mild-mannered lap dog. Photography ©GlobalP | Getty Images

3. The Pinscher puzzle
Part of the confusion surrounding the breed’s origin comes from the word “pinscher,” which is a descriptive term for a family of related dogs, like “setter” or “terrier,” and denotes a method of working. “Pinscher” refers to a dog’s habit of jumping on and fiercely biting its quarry. A definition in Henne’s Dictionary of the German Language says that Pinscher is “borrowed from the English word ‘pincher,’ meaning one who pinches, nips or tweaks.”

4. Min Pin moxy
The AKC standard describes the breed’s character using terms like “… sturdy… proud, vigorous, and alert… [with] fearless animation, complete self-possession, and… spirited presence.” These traits have earned the Min Pin his nickname the “King of the Toys.” Despite his diminutive size (10 to 12½ inches in height at the top of the shoulders), he is no mild-mannered lap dog. He is a keen watchdog, strong-willed, ready to take on anything he perceives as a threat and given to barking, which new owners need to be prepared for. Of course, he is also curious and funny, and the perfect companion for dog lovers who have thoroughly researched the breed.

5. Hackney-like action
The Miniature Pinscher moves out like no other breed. It is a “hackney-like action,” resembling that of the Hackney pony. The AKC breed standard describes it as a “high-stepping, reaching, free and easy gait in which the front leg moves straight forward and in front of the body and the foot bends at the wrist. The dog drives smoothly and strongly from the rear. The head and tail are carried high.”

6. Min Pin color palette
While solid, clear red is the color we see most frequently in the breed, Min Pins can also come in stag red (red with an intermingling of black hairs, named for the deer or “stag”); black with sharply defined rust-red markings on the cheeks, twin spots above the eyes and on the legs; and chocolate with rust-red markings as specified for the blacks. At one time, blue-gray Min Pins with rust-red markings were permitted in the breed standard but no longer. The color is a dilute and can be genetically linked to skin issues in some dogs. Blue puppies do occasionally pop up in litters, and there are a few breeders who would like to see the color reinstated in the standard.

7. Easy-peasy grooming
While training this energetic and territorial little breed can be a challenge, grooming the Min Pin is a breeze. The breed’s coat is smooth, hard and short, straight and lustrous, and tightly covers the body. An occasional brushing to remove loose hair, as well as frequent toenail trimming, will keep the high stepper looking shiny and sleek.

Learn more about other dog breeds on dogster.com:

10 comments on “The High-Stepping Miniature Pinscher”