Is the Brutal Practice Called “Trunking” Real? We Asked an Expert

Earlier in the month, Dogster’s news writer Michael Leaverton shared a story that made everyone on our team cringe. It was the first time we’d heard of “trunking,” a disgusting practice where two dogs are put into the trunk of a car and driven around, expected to fight until one “wins” and the other dies. This post included quotes from a video report filed by a Miami news station, WPLG Local 10, which featured group of dogs rescued from a trunking situation by the Miami-Dade Animal Services Department. 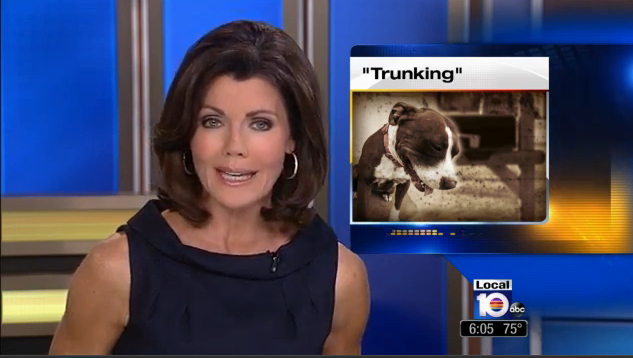 The story struck a nerve well outside our regular readership and has been the most-trafficked story of the month thus far. More than 6,000 readers shared it on Facebook, and the response we’ve gotten in the comments section, on our Facebook wall, and in emails was overwhelming. Many were furious with the practice itself, and others were mad at us for “sensationalizing” a report they did not believe to be true.

Over the weekend, Dogster Community Manager Lori Malm and I attended the Blogpaws conference in Virginia, and we were invited to a private viewing of the ASPCA’s dog fighting exhibit at the National Museum of Crime and Punishment in Washington, D.C. Before the tour (which included a startling map of the number of dog fighting arrests made in the U.S., and a selection of sinister-looking contraptions used by dog fighters), we met with Dr. Randall Lockwood, senior vice president of the ASPCA’s Forensic Sciences and Anti-Cruelty Projects.

Lockwood has a ridiculously long and impressive resume, and has worked with humane societies and law-enforcement agencies for more than 30 years. He has testified in numerous trials involving cruelty to animals or the treatment of animals in the context of other crimes such as dog fighting, domestic violence, and homicide. He also helped orchestrate the exhibit we were there to see.

Before the tour, he talked about his work on the forensics team, and he called dog fighting “the greatest violation of that relationship between people and dogs.”

“Dogfighting does not occur in a vacuum,” Lockwood told us. “It almost always involves illegal drugs and illegal weapons.” And getting those in law enforcement to see the correlation between the sick sport and other crimes has helped make shutting down dog fighting rings more of a priority.

But trunking isn’t something dogfighters necessarily do. After our tour of the exhibit, we took Lockwood aside to ask about the practice, which he confirmed is real (albeit not widespread) and not a Snopes-worthy prank or urban legend. The first time Lockwood heard of an official trunking case was two years ago, and there were rumors about it for years before that.

“We are hearing some reports of trunking. We had recent reports from Texas, some from, I believe, New Jersey and Missouri, but it seemed to be a relatively [isolated] phenomenon,” he said. “Unfortunately it’s one of those things that goes viral on the web, that then idiots hear about and think ‘Y’know, that might be interesting to try.'”

“It has nothing to do with the ‘sport’ of dog fighting,” Lockwood continued. “It’s nothing that a professional or hobbyist would engage in, because it defeats the purpose of recognizing a well-trained dog and breeding a successful fighter. It’s just brutality.”

“I still hear very few confirmed cases, but I will no longer say ‘Now I’ve heard everything,’ not in this business. There’s no limit to the depths of idiocy that some people will go to.”