Next on The Scoop: Hank the Milwaukee Brewers Mascot Gets a Doghouse

We Talk to Veronica Grey the Surf Lady and Her Dog, Flash

The actress and author shares her passion for dogs, dolphins, and protecting the oceans.

Veronica Grey is a pioneer in her field. Inside this iconic, exotic beauty is an old soul and a strong animal rights advocate. Because of her multi-award-winning environmental documentary Aqua Seafoam Shame and her tireless efforts to rid the oceans of plastic, Veronica has been called “The Surf Lady.” Her passion extends to whale safety (focusing on the military using crippling sonar gun blasts, which causes the mammals to go deaf) and protecting people from sharks by inventing the first shark-repellent swimwear. There are also cool surfboards! 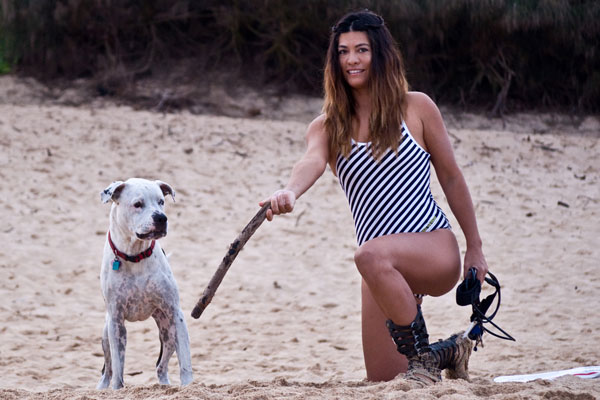 Now living in beautiful Hawaii with her fabulous dog, Flash Delirium, Veronica also trains and raises service dogs, in addition to being a health and wellness guru. Where Veronica goes, so does Flash! I caught up with her to talk about dogs and surfing.

Dogster: Why the name Flash Delirium? It’s a great name for a racehorse!

Veronica Grey: Flash Delirium is named after the band MGMT. Basically [lead vocalist and guitarist] Andrew Van Wyngarden and I were sort of involved and he was on the road so I felt a dog would keep me company.

I rescued Flash when he was eight weeks old, from the pound. They say when you do that you save the life of two animals — the one you bring home and the one you made room for in the shelter by adopting a dog. 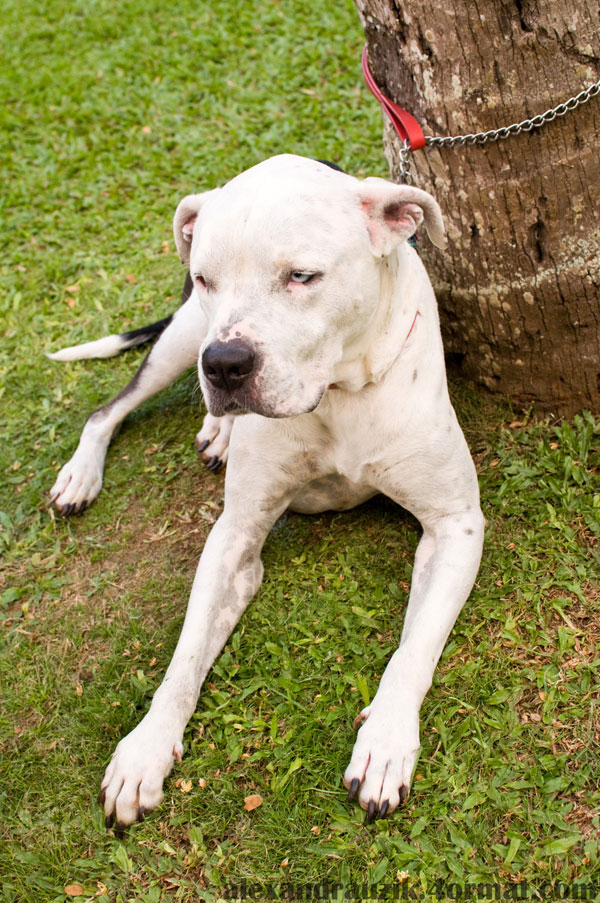 One time when he was an adorable little puppy I tied him outside the Hard Rock Cafe in Sacramento just to run and use the bathroom. When I finally emerged Flash was gone! My heart broke and I prayed to God on my knees to bring him back. Just then two little girls came walking down the street looking like it was Christmas morning, grinning from ear to ear with Flash in their arms. Turns out a homeless person stole Flash and sold him to them for $80, which I happily reimbursed.

Does he get a special diet?

This is an important question, and this answer could easily double your dog’s life span — the truth behind all commercial dog food is that the ingredients are so questionable it is like feeding your kids McDonald’s for every meal. 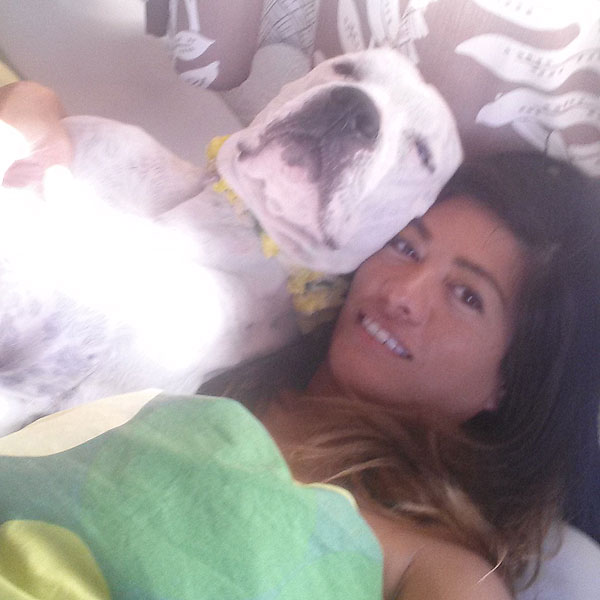 The only healthy dog food is vegetarian dog food, and anyone who says that vegetarian dogs don’t get enough protein should know that is hogwash, because gorillas are 100 percent vegetarian and they are the king of the jungle. Many of our planet’s strongest animals have zero meat in their diet and do just fine. 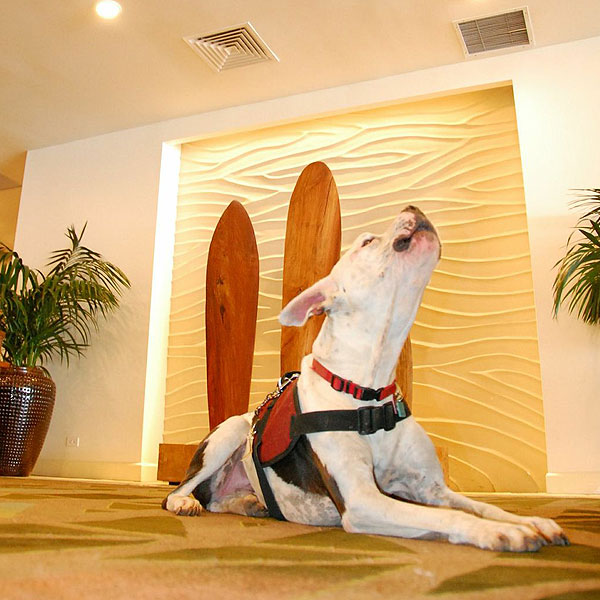 Not only do I feed Flash vegetarian dog food, but I also soak it in water a minimum of two hours before serving. Two parts water to one part dog food. … In the wild animals eat only moist food and live longer.

No pun intended, but that’s food for thought! Does he snuggle with you at night?

Yes, until I get married, which I feel is happening imminently. Flash sleeps right next to me and snores like a freight train. He will definitely be in the wedding. 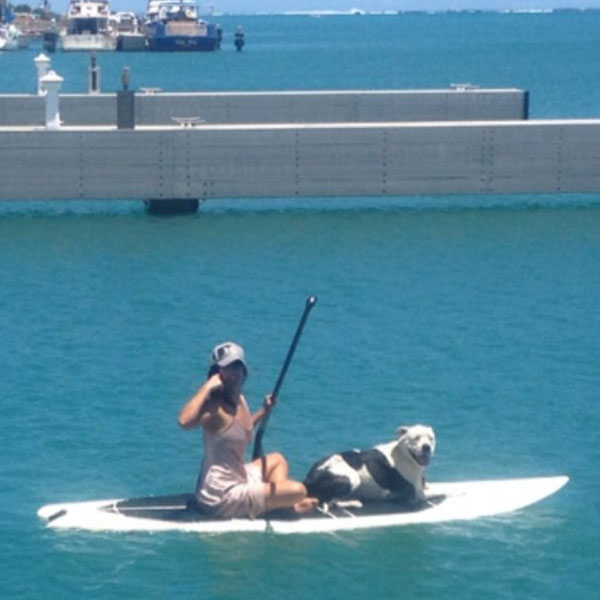 Does Flash surf too?

Flash knows how to sit on a stand-up paddleboard very well, but we haven’t caught any waves. We just go up and down the peacefully calm river in Haleiwa, O’ahu. One time we were in a kayak with Ke Aloha [a rehomed service dog Veronica trained] and we did catch a wave and the kayak tipped over. All of us were in the ocean, and this was super scary to me because sharks will eat dogs. I was horrified, because Hawai’i is tiger shark territory and as a surfer I heavily researched as much as I could on how to avoid a shark attack.

One of the tips is that even more than blood, what attracts sharks is excessive splashing because it reminds them of an injured fish flopping about. Doggy paddle is definitely excessive splashing so you should be very cautious about allowing your dogs to swim far into the ocean. 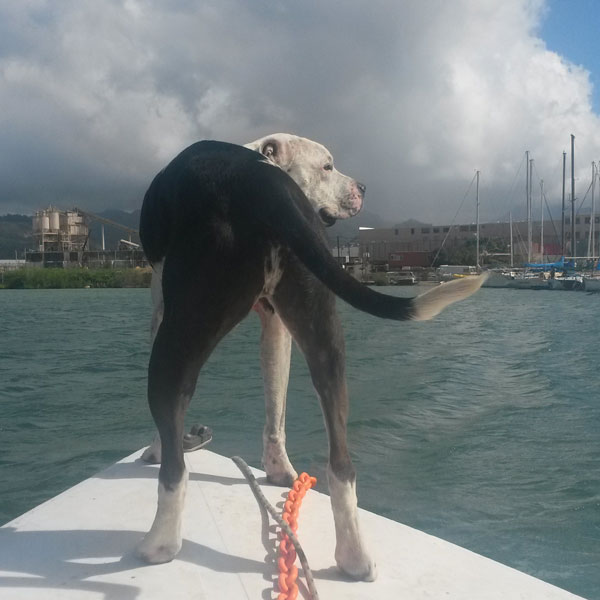 Another critical lifesaving water tip is that sharks tend to avoid black and white stripes, so I trademarked the concept and marketed the world’s first line of shark-repellent wetsuits, shark attack mitigation surfboards, and shark repelling swimwear.

Does Flash understand you when you talk to him?

Absolutely, but we also communicate telepathically. Like all animals, dogs are telepathic. If one chooses to go into silent meditation and “talk” to their dog in the ether, one might be surprised.

If you could trade places with any type of dog, what would it be? 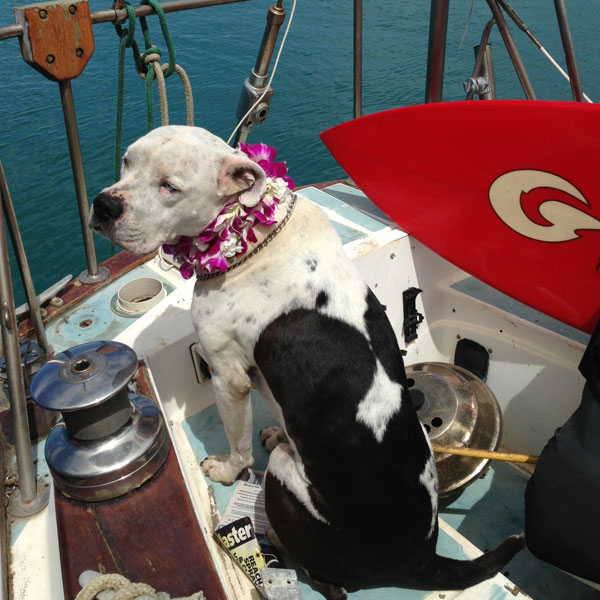 What other animal organizations do you support?

Sea Shepherd is doing amazing work trying to protect dolphins in Taiji, Japan, where they are legally slaughtered on a daily basis. Sea Shepherd tweets daily photos [@CoveGuardians] and videos that destroy my heart to watch, but awareness is half the battle. If God gave me three wishes to save the earth it would be organic food only, compostable plastics only, and to save all the dolphins, especially those of Taiji. 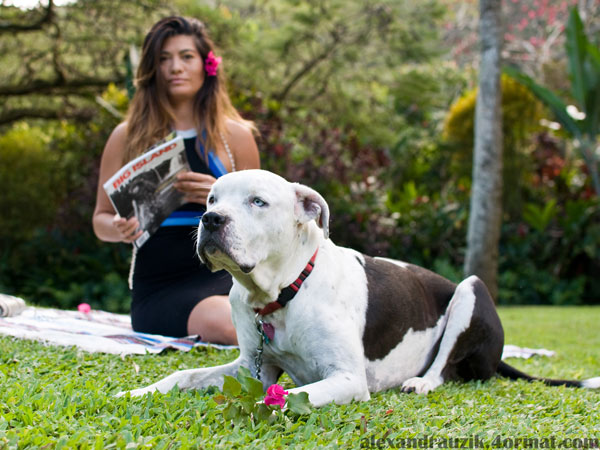 Do you travel with Flash?

Flash comes with me everywhere. Planes, hotels, restaurant, my car …

Any quirky things about his personality?

Flash likes kisses. Sometimes on the tongue. Guilty of delivering. 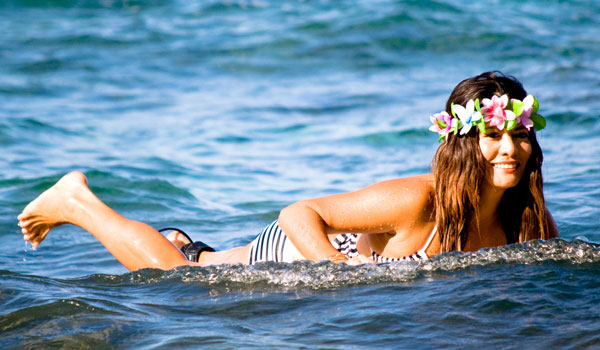 Have you taken him to any alternative healers?

As a licensed Usui certified Reiki master myself, I have given Flash many Reiki healings.

What about dressing him up in clothes or holiday costumes?

One of my favorite photos of Flash in an outfit I dressed him in his birthday. He has a priceless look of embarrassment on his face, and looks like he is trying to hide under the bench here at the dog park in Playa Del Rey, California. 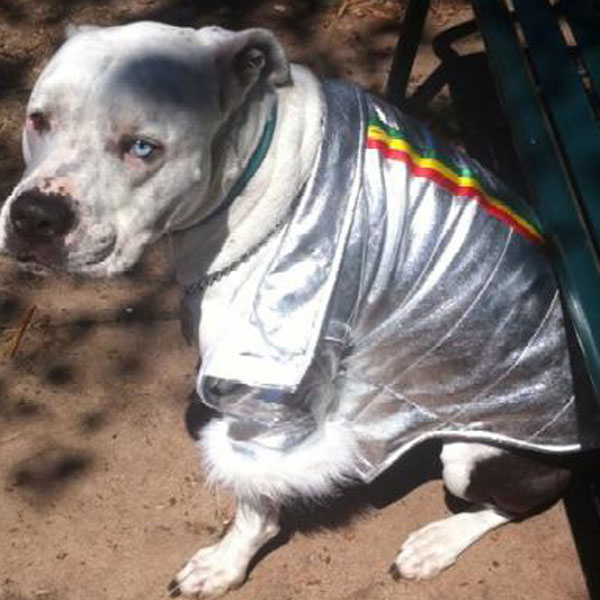 If you had all the time and money to devote to animals, how many would you have and where would you want to live?

I would like to live in a planet where dolphins are happy and safe. And not just because they have also been known to protect humans from shark attacks! 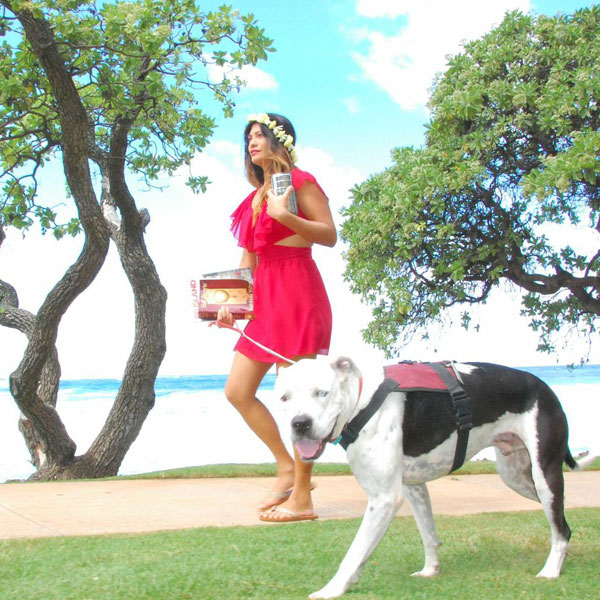 Keep up with Flash and Veronica by following her on YouTube, Facebook, and Instagram, and following Flash on MySpace. You can also learn more about her doc, Aqua Seafoam Shame, her line of shark-repellent swimwear, and her site Surfing Universe.

Read more from Marina and more about celebs and their dogs:

Her film/TV credits include Dexter (opposite Jennifer Carpenter); co-lead in the Emmy-nominated web series Sophie Chase, Law & Order LA, and Desperate Housewives; supporting and guest star roles in Dangerous Curves, Sex & Mrs X (opposite Linda Hamilton), Forever Knight, and Kung Fu: The Legend Continues (opposite David Carradine); the Genie Award-winning film 32 Short Films About Glenn Gould; and many other productions, national commercials, and voiceovers. Marina’s passion is helping animal rescue organizations. Look for her next book, The Adventures Of Lulu The Collie,which stars her beloved dog, Lulu, daughter to Lassie VIII, and keep up with her work by following her on Facebook.

One comment on “We Talk to Veronica Grey the Surf Lady and Her Dog, Flash”