I’m heading to Lackland Air Force Base in San Antonio, Texas, for about a week, to learn more about military dog teams, and to attend the DOD’s Military Working Dog Competition. It’s essentially a military Iron Dog event, and promises to be really exciting and show just what these teams are made of. It’ll be great to see some familiar dogs and handlers and to meet new ones.

One of the highlights of my trip will be visiting a dog named Buck again. I’d met the chocolate Lab at the Lackland adoption kennels last summer while doing research for my book Soldier Dogs (now a New York Times best seller! I’m not the only one who loves these dogs). Unlike all the other dogs around him, he wasn’t barking or twirling or standing excitedly and wagging. He was curled up in a ball on the hard kennel floor, gazing out into nothingness. My heart broke for him, especially when I learned he had PTSD. 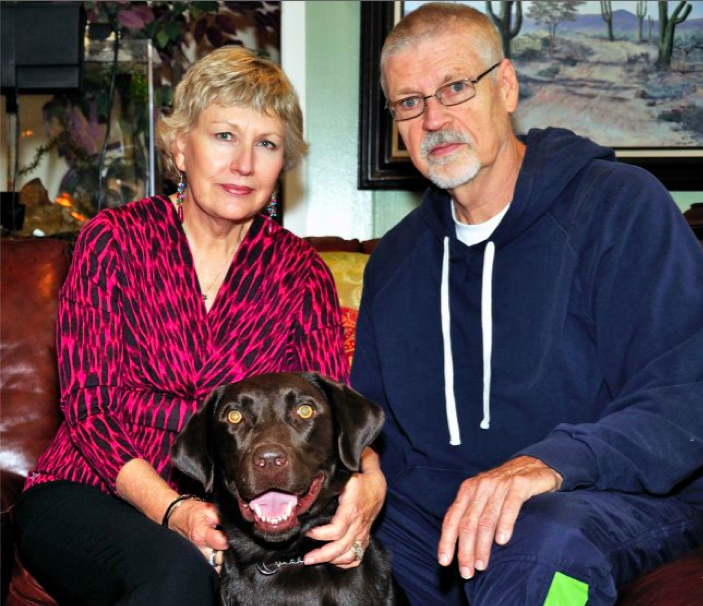 I was relieved when someone told me that Buck was going to be adopted by a wonderful couple, Lynette and Larry Sargent, the very next day. That’s them in the photo above. I’ve been in touch with them since shortly after they adopted Buck. They have done everything to help get him out of his skittish, oft-terrified, oft-vacant state.

This dog may have had bad luck in Afghanistan, but he could not have been luckier in landing a loving family. He has gotten much better under their care — especially after they adopted him his very own puppy.

(The wagging you hear is from my happiness about being able to shake paws with Buck and his whole family tomorrow evening.)

And speaking of reunions involving military and dogs, here are a couple of uplifting videos to start your weekend on the right paw. I love the way the German shepherd in the video below is so excited to see his owner return from deployment that he can’t help but talk with his mouth full. He has a ball in his mouth, and his beloved owner by his side; it doesn’t get much better than this for a dog.

The video of another reunion, below, is also super sweet. It’s funny; the reunions with little dogs often involve a lot of barking and yapping and yipping and running at hyper warp speed. But the bigger dogs, while their hearts are clearly just as joy-filled, often tend to be slightly more manageable. I’m not so sure that a giant Great Dane standing on his hind legs is manageable, but there’s not usually the utterly chaotic frenzy with the bigger guys. There are exceptions galore, but humor me on this one.

And finally, here’s a Siberian husky who’s super stoked that his Marine “dad” has returned from yet another deployment.

Happy weekend! Next time I talk to you, I’ll be in the Lone Star state!