Next on The Scoop: Brutus the Rottweiler, a Quadruple Amputee, Gets Four New Feet

But first, Angels Among Us seeks a foster to love, dote on, and acclimate Daijon to life as a pet.

Watching Daijon the Pit Bull bound across the yard in fast pursuit of a tennis ball, you’d never suspect that this goofy, playful hunk of a dog had been on the brink of death just a short time ago. Following an anonymous tip on Feb. 6 that a dog had been hit by a car and was lying on the side of a road in Atlanta, Fulton County Animal Services went out to retrieve the animal. They assumed the dog would be deceased, but when they came upon the motionless Pit Bull, they not only realized he was still alive but also that his injuries were inconsistent with those from a car accident.

“There were multiple puncture wounds and lacerations to his neck, shoulders, legs, and face, typical of one or several dogfights,” says Cris Folchitto, a full-time volunteer and foster with Angels Among Us Pet Rescue, a nonprofit organization dedicated to saving companion animals from high-kill shelters throughout the state of Georgia. “He was probably a fight-dog fail in that they tested him, but he showed no aggression, or he was used as a bait dog. Once animal control realized this, they sent me a text and our rescue went into action.”

Dog fighting is a vicious, sadistic blood sport that sets two dogs against each other in a gruesome fight to the death, all in the name of human entertainment and financial gain. American Pit Bull Terriers and other bully breeds are the most common dogs used for fighting, due to their brute strength, strong sense of loyalty, and willingness to please their humans. Fighting dogs are either killed after losing “matches” or die from their wounds, while submissive dogs who won’t fight are typically used as sparring partners, or “bait.” So while spectators may win big money gambling on the outcome of dog fights, the dogs are the ones who always lose in the end.

But the newly named Daijon, which means “pillar of strength,” wasn’t about to lose his battle with death. Besides massive bite wounds and ripped and oozing flesh, the Pit Bull was also emaciated and loaded with heartworms. Though he must have been in great pain, the gentle dog showed no aggression, only trust, as he allowed the emergency veterinarian and his staff at Georgia Veterinary Specialists to do whatever they needed to do, as if he knew these kind humans were trying to save his life.

“He has an extremely gentle and sweet demeanor,” reads Daijon’s initial medical assessment. “He maintains a stoic face even when he is poked and prodded during his exams. He shows no aggression, has soulful eyes, and seems to embrace any affection that humans will offer to him.”

Undaunted by the challenge of piecing the torn and battered canine back together, the vet and his team went to work cleaning and suturing Daijon’s myriad wounds, which included a torn and infected upper lip, a pus-riddled ear canal, and a deep, infected shoulder wound that would require a suction drain for 10 days. After a week under GVS’s expert care, the stitched-up pup was transferred to Chattahoochee Animal Clinic, where he would undergo daily wound care and cold laser therapy to promote healing. The long road of recovery had begun for the courageous Pit Bull.

Several weeks after his rescue and surgery, Daijon is a different dog. Most of his wounds have healed, his body has gone from bony to muscular, and his white and blue coat has transformed from dull to glossy. While his amber eyes glow with joy and renewed vigor, at times you can still see traces of sadness in his gaze, perhaps the residual effects of the abuse and neglect he has endured in his brief two years on the planet. But with a long life ahead as someone’s beloved companion, the sweet Pit Bull’s sad memories may soon be long forgotten. 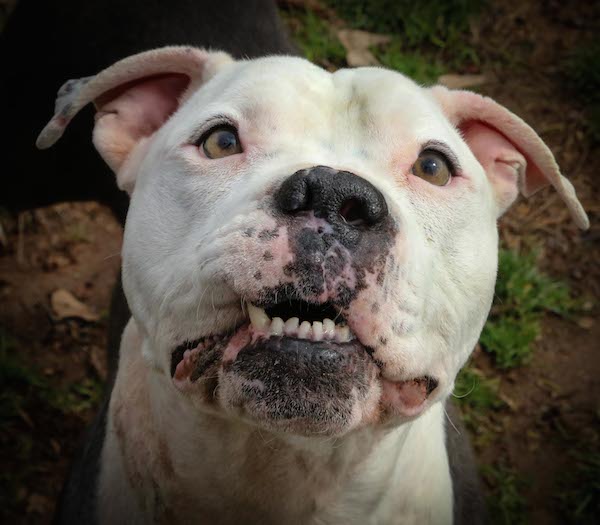 While Daijon remains at the clinic — where he has become a staff favorite –- and undergoes his heartworm treatment, AAU is avidly seeking the right foster home where the gentle dog can be loved, doted on, and acclimated to life with a family. Unsurprisingly, he recently passed his professional temperament assessment with flying colors, demonstrating no aggression or defensiveness toward other dogs or humans, so he’ll have no problem living in a house with fur brothers and sisters as long as they’re not too dominant, says Folchitto.

“He loves people and is very food driven, which will make him easier to train,” explains Folchitto, who has fallen in love with Daijon (like everyone else who meets him) and says she would adopt him if she didn’t already have eight dogs of her own. “Rehabilitating a former fighting dog requires love, stability, a solid pack leader, and exercise. These dogs should avoid stimulations like tug-of-war toys or stressful environments. Socialization and structure are the winning factors in raising and rehabilitating any dog.” 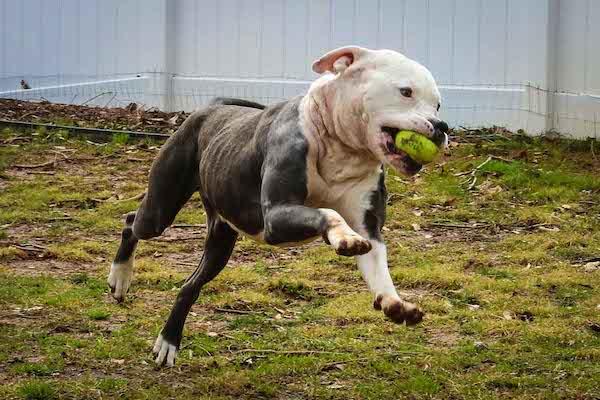 As the most euthanized, neglected, and mistreated breed of dog due to their unfortunate association with a subculture that has used, abused, and overbred them, Pit Bulls have definitely been given a reputation they don’t deserve. Forgiving, resilient, smart, and loyal, they are eager to please, often the easiest to train, and make amazing family companions, says Folchitto, who has adopted, fostered, trained, and served as an advocate for bully breeds for almost two decades.

“They are big goofballs, and their smiles are contagious, but they can also be hardheaded and bossy, which is why they need an experienced dog owner who will provide them with solid leadership,” she says. “They are great companions and very patient, especially with children. They’re not great guard dogs, as they love everybody and only in extremely rare cases have they been aggressive toward humans. In fact, the American Temperament Test Society actually ranks them as one of the easiest breeds to train, with the best overall temperament.” 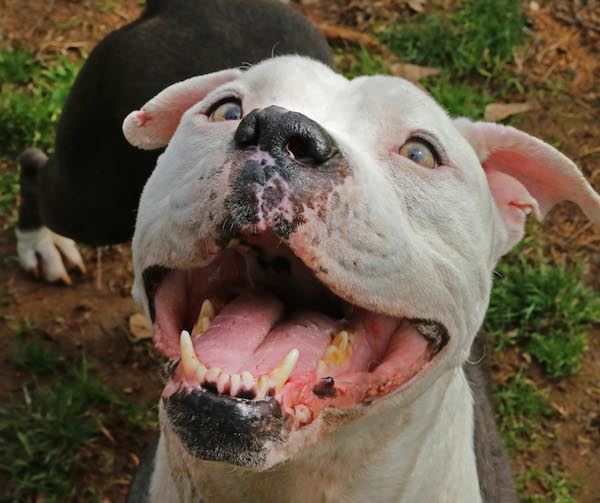 So what would be the perfect forever home for Daijon, the unsinkable, people-loving Pit Bull?

“An experienced dog owner or a person who is willing to learn, be patient, and devote time to him,” says Folchitto. “He would definitely benefit from a home with one or more balanced young dogs with whom he can let out his energy, and a fenced backyard would be paramount for him to run and play. If the home has children, they should be above the age of six, as he is clumsy, goofy, and doesn’t completely know his strength.”

If you live in Georgia and you think Daijon could be the perfect pup for you, please contact Angels Among Us and fill out an application. You can also learn more about the amazing organization by visiting its Facebook page.

About the author: Lisa Plummer Savas is a freelance writer, journalist, devoted dog mom, and animal activist. In an effort to help make the world a more compassionate place for non-human species, she is especially focused on using her writing to spread awareness about controversial animal welfare issues, including the dog and cat meat trade in Asia and Africa. She lives in Atlanta with two spoiled German Shepherds, one very entitled Pug, and a very patient, understanding husband. Read more of her work.