Next on The Scoop: Charlotte Tries Out the Big Barker Orthopedic Dog Bed
Dogster Exclusive

Meet Winny the Corgi, Who Helped the Queen Celebrate Her Birthday

The Pembroke Welsh Corgi dresses up and does great work for charity too.

In London this weekend there was an interesting twist in royal protocol during the Queen’s 90th birthday celebrations. There was Her Royal Highness, down at street level, waving to her public as she drove along the Mall from Buckingham Palace. And up on a balcony, gazing down on her, was a Corgi … 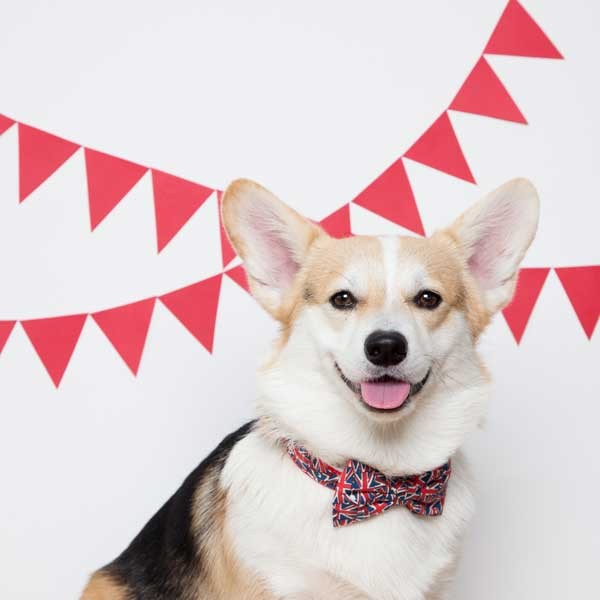 Of course, the Pembroke Welsh Corgi has been the breed of choice for the British Royal Family for more than 70 years, and the current monarch has owned more than 30 during her reign — but this particular pup was Instagram star Winny the Corgi! 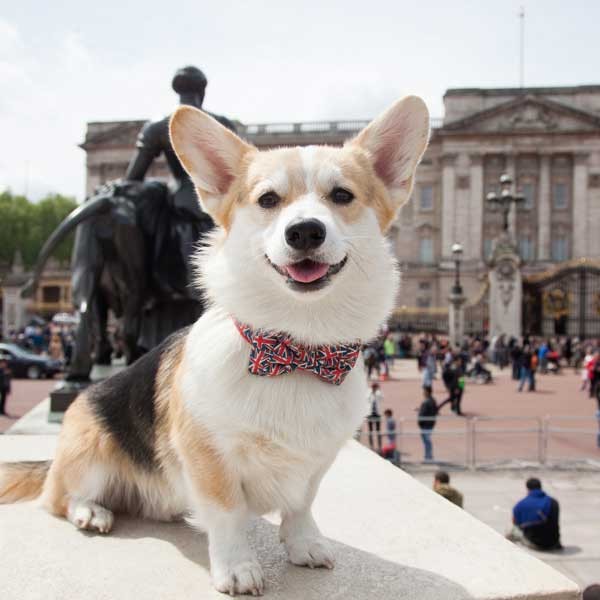 “We were invited to a special reception as guests of the RSPCA (Royal Society for Prevention of Cruelty to Animals), one of the Queen’s chosen charities, for the Patron’s Lunch,” explains Winny’s owner, Rachel Oates. “It was such an honor to witness one of the biggest street parties in the world — 10,000 people drinking 33,000 cups of tea, unfazed by the rain — it made me proud to be British!”

Did they see the Queen? “Yes, I loved that she was in bright pink so everyone could spot her!”

Meanwhile Winny was getting plenty of attention himself. “It was hilarious — every person we passed gasped, ‘Ooh look — a Corgi!’”

Hey Luna, does my breath smell? The Queen is about to walk by! ?

This isn’t the first fabulous invitation Winny has received. The Kennel Club welcomed Rachel and Winston to this year’s prestigious Crufts dog show, and just last week they were partying with Kevin Hart from the upcoming animated comedy The Secret Life of Pets.

“We were invited along to a Doggy Dinner to celebrate the film release and the food for the dogs was insane,” Rachel recalls. “They even had individual lamb hotpots and dog-friendly brownies!” 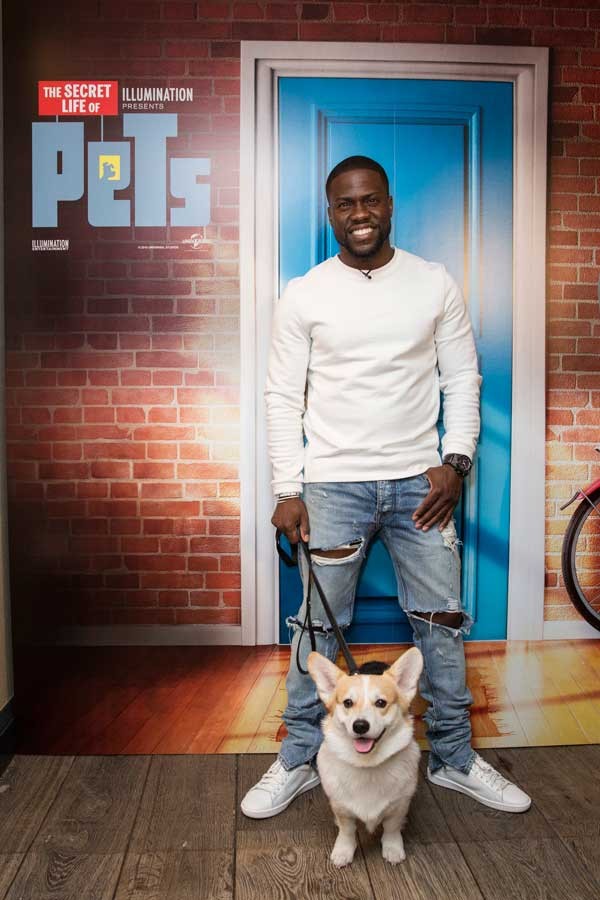 Winny got to hang out with movie star Kevin Hart. Photo courtesy Winny the Corgi/Instagram

Rachel says that meeting Kevin Hart was the highlight of the day. “It was so sweet. He gave everyone the chance to have their photo taken with him, but I think he took a special shine to Winston. They even attempted a Twitter selfie!”

Winny may have over 23,000 adoring followers on Instagram, but Rachel is no stranger to the glamorous side of life herself. “I was a fashion/event photographer and yes, I did enjoy it, but then I did a couple of studio setups for Winny’s first birthday (nearly a year ago now) and it all just clicked in my mind: This is so much fun. Why can’t I do this every day?” 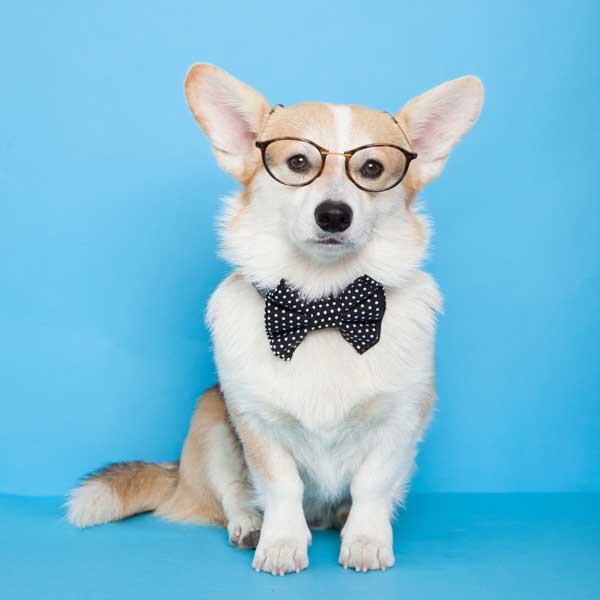 After researching the marketplace, writing business plans, and talking to her partner, she decided to set up Rachel Oates Pet Photography. “I do still have a few fashion clients but I’m excited to say that now nearly all my work is dog/pet related and I couldn’t be happier!” And it’s all because of Winston. “He has flipped my life upside down and totally changed it in all the right ways.”

Rachel’s fondness for animals started early. Though she was born in London, her family moved to Thailand when she was four and there she had a “mini pet zoo with hamsters, guinea pigs, fish, birds, a rabbit and a couple of dogs.”

After country-hopping around the world from Russia to Dubai, she settled in East London with her boyfriend. “I spent a good four years convincing him that we needed a dog in our lives, and then many more months researching a breed to match our city lifestyle!” 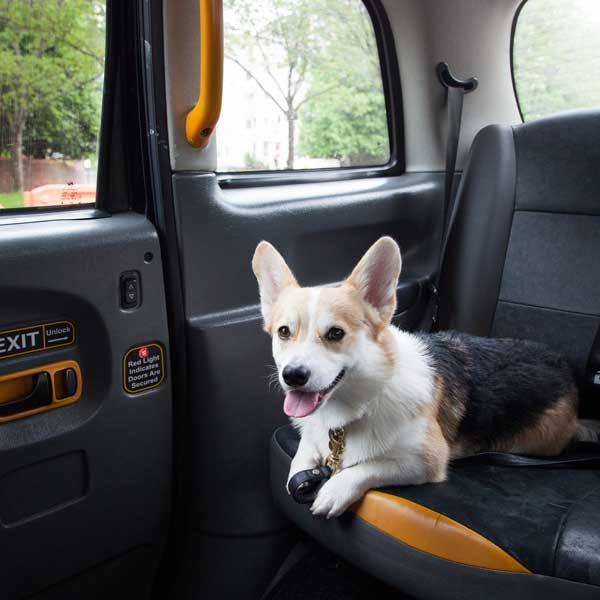 Winny enjoys a ride in a London taxi. Photo courtesy Winny the Corgi/Instagram

Since Corgis are “quite a rare spot in London,” she waited to take her partner to a Discover Dogs event where they could interact with dogs and breeders.

‘We then went down the recommended route of finding a Kennel Club Assured Breeder and I have to say Winston was absolutely perfect from the first moment I met him – a brave little guy, sweetly inquisitive and a serious love bug: every morning he jumps on the bed, bum and tail wagging like crazy giving us both kisses and then as he stretches he sings!”

Is she surprised more people don’t have Corgis? “I’m definitely all for trying to change the current perception in the UK that Corgis are only owned by old people. They are great dogs for all ages but they just need a little help with their PR here.” 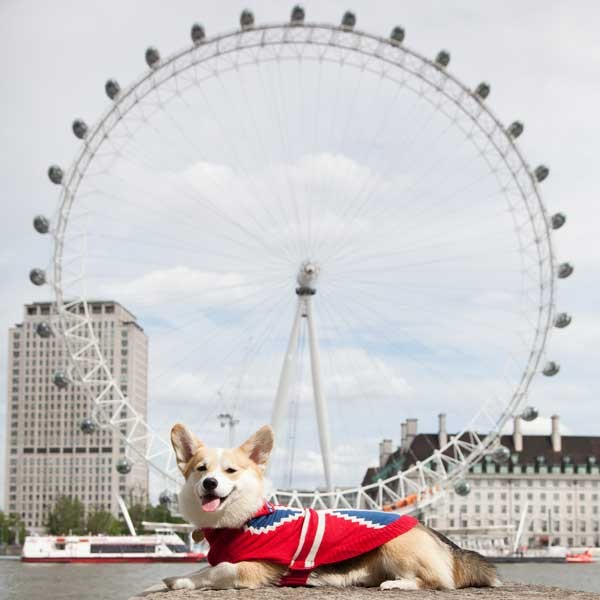 Rachel chose the name Winston “because we felt Corgis need a proper English-sounding name” before they set him up with his own Instagram account. “Little did we know how popular the name Winston is for Corgis! Which is why his handle had to be his nickname, @Winnythecorgi.”

Naturally, Rachel is often asked for advice on how to turn a beloved dog into an Instagram star. “I always recommend using popular hashtags such as #ThrowBackThursday for your puppy photos as well as commenting on and liking other accounts. Also try to combine fun photos with fitting comments.” One of her most popular images features Winston looking out a train window with the caption: “I wonder if I’ll ever find out who’s a good boy?”

His heart-meltingly warm gaze has led to modeling gigs for Pets At Home (like PetSmart in the US) and Gay Times Magazine, where he can be seen sporting a straw trilby and Ray-Bans in their vacation packing guide. Next up is a photo shoot for PetsPyjamas and then Amazon Pets UK, where they are also judging the competition to find the New Face of Amazon Pets. 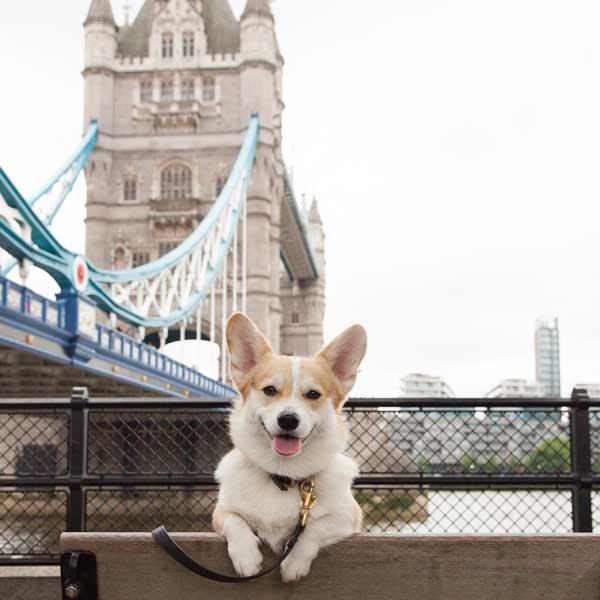 Rachel’s future ambitions include further promoting favorite animal charities like All Dogs Matter and The Mayhew Animal Home and one day photographing Stephen King and his Corgi, Molly, because “he nicknamed her The Thing of Evil so she must be such a character!”

Speaking of character, Winny makes for a dapper Winston Churchill posing in the library of The Chesterfield Mayfair Hotel, a gorgeous dog-friendly property a short walk from Buckingham Palace. As Rachel notes, “It was the perfect fit — all that was missing was a cigar!” 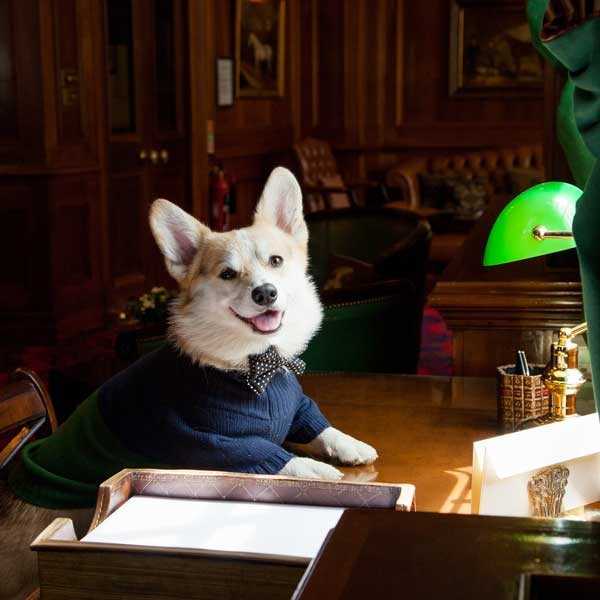 It was a busy day for Winston, continuing the Dogster shoot in the back of a London taxi and at the London Eye, Tower Bridge, and then of course back to Buckingham Palace.

I wonder whether Rachel got any double takes while photographing a Corgi there. “It definitely was an experience! Loads of people came over to say hi to him, give him cuddles, and take their own photos.” And, of course, he totally loves the attention. “Of course by the end of the day he is ready to fall straight asleep, but I really don’t think he could get bored of meeting new people and getting cuddles constantly. … He really is living the doggy dream.”

About the Author: Belinda Jones runs the dog travel website Bodie On The Road (Your Guide To Tail-Wagging Travels).