Next on The Scoop: HSUS Humane Lobby Days Inspire Animal Lovers to Be a Voice for Dogs

We chat with one of the creators, dog trainer Jill Breitner, about the reason for the app: to reduce dog bites and resulting euthanasia.

Dogs don’t speak human. No matter how many times I ask Riggins, “What’s wrong?” he doesn’t respond. I have to read his body language for clues as to how he is feeling.

Recently I had hiked up to the Observatory in Los Angeles’ Griffith Park with him and two other dogs I was sitting. We got to the main building before it opened for the day, and I did what I always do: pose the pups for a cute picture. As I secured the dog’s leashes, I heard a woman behind me yell, “This isn’t a good place for dogs.” I turned around and asked what I felt was an obvious question, “Why?” She answered, “They might bite someone.” 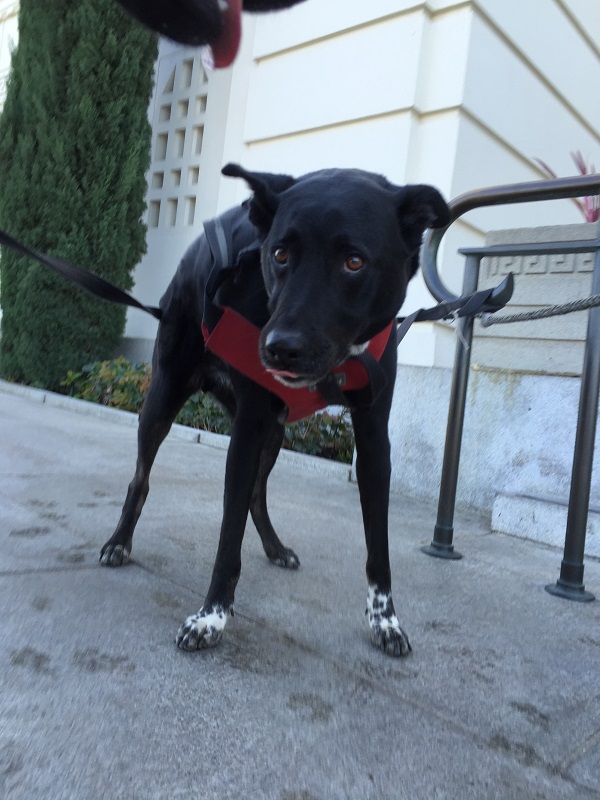 I looked back at the dogs, around the park at other dogs hanging out, and then at her. The woman had her granddaughter with her, and she was projecting her obvious fear onto the girl. Refocusing on the dogs, I noticed my pup had changed how he was standing. Responding to her new energy, he was curled up with his back up and his tail tucked, his eyes were big and round almost pleading with me. There was no doubt that his body language said, “Mom, this woman is cray cray. She better not get any closer!”

Jill Breitner, a dog trainer for more than 35 years, explained to me that knowing how to read a dog’s body language is extremely important and a skill everyone should have. The knowledge can save you from getting bit and can save a dog who was just being a dog from being unnecessarily villainized and possibly euthanized.

Upon hearing about my experience at Griffith Park, Breitner identified more signs that my dog gave me that day, ones I hadn’t noticed. The “tongue flick,” “tense body,” and “head lowered” behaviors, which Breitner says are additional signs of stress, were all present.

To help humans better understand what their dogs are trying to say, Breitner worked with Jeff Bellsey, a technology expert, and Lili Chin, a professional artist, to build a smart phone app called DogDecoder. It does exactly what the name suggests: It helps you decode what your dog’s body language is telling you. 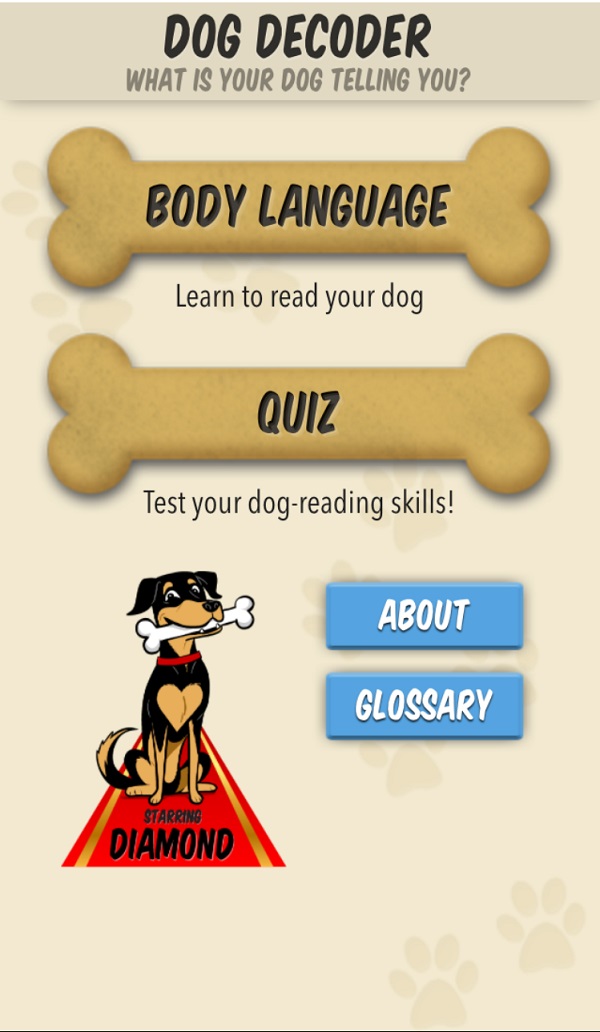 The app goes through approximately 60 different dog poses, pairing each with one of Chin’s illustrations. Each pose includes a descriptive title; an info page explaining what the app’s dog, Diamond, is feeling and how he may respond if ignored; and a detail page that points out exact body language to look for.

Going through the poses, I quickly found one that mirrored what my dog looked like at the observatory. The pose is titled Anxiety. From the info page I learned, “Timidity is the first step toward aggression.” That bit of info is certainly one that any owner should know. 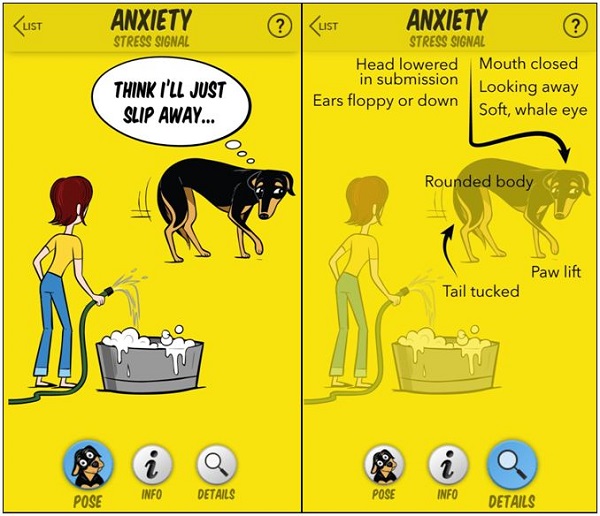 Although all the poses from DogDecoder are important to learn, Breitner chose three poses from her app that she wanted to talk about in particular: 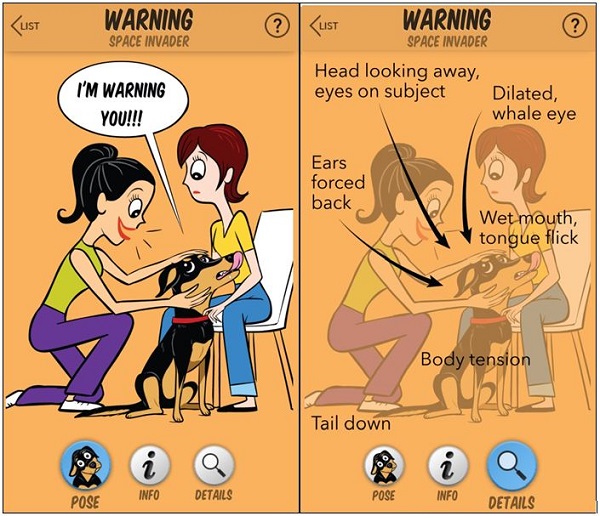 This is the body language of a dog who is about to bite. In the DogDecoder app, it explains it as Diamond the dog screaming, “GET AWAY!”

This is the warning position that finally led Breitner to move forward with designing the app. In 2012, KUSA anchor Kyle Dyer was bitten in the face by Max, an Argentine Mastiff, who was part of a news story interview Dyer was conducting.

“The warning pose shown on the app is exactly what happened,” Breitner explains. “I looked at the video, and I looked at it in slow motion, and it was very clear that dog was going to bite.”

For Breitner, that incident was the last straw. She knew that she had to find a way to reach more people and teach them how to read dog body language. 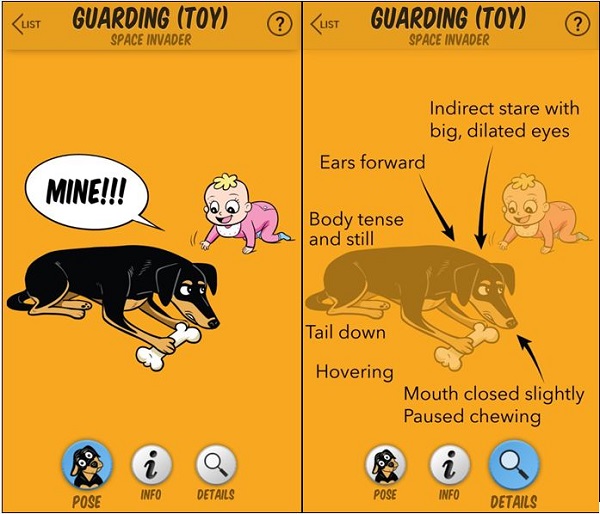 DogDecoder details that pausing is an important signal for parents to learn, as children will sometimes misinterpret a dog’s pause as an interaction when, in fact, it is a warning sign.

Families with children are often at high risk for misinterpreting dogs. Family pets are often expected to happily tolerate pulling, chewing, grabbing, and other actions from their human brothers and sisters. Breitner warns, “While some dogs will tolerate it, that doesn’t mean it’s OK.”

Breitner relives an example of a child and dog interaction that she witnessed, one that ended badly. Breitner was at a park when an 18-month-old boy spotted a Lab who was tied up against the fence by the child’s play area. Instead of heading to play with the other toddlers, the child went straight for the dog.

“I was in slow motion at the other end of the park, thinking, ‘Oh, no. Please don’t let this happen. Please let the mother catch this kid first.'” The child wasn’t stopped. “He [the toddler] walks over to the dog and gives the dog a hug, and the dog rips the side of his face off.”

After running over to help the child and family, Breitner learned that the toddler’s family had two Golden Retrievers, which the child hugs all the time. “That doesn’t mean they can do that to any other dog.” Breitner believes that educating children about dog body language can stop these kinds of dog bites from happening in the future. 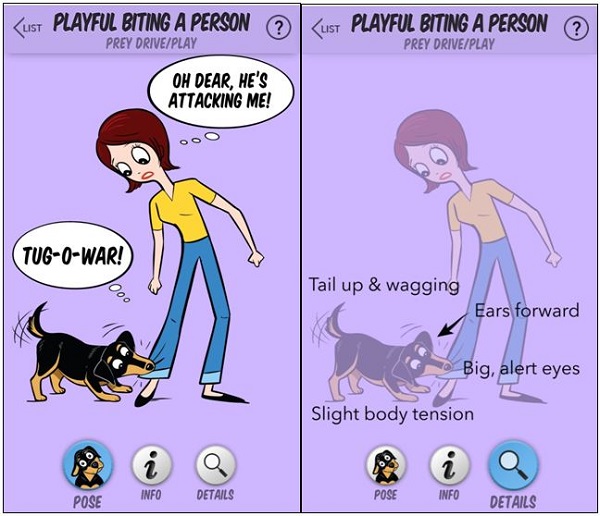 DogDecoder explains that “this is one of the most misinterpreted interactions between dogs and humans!” Many times, a new dog owner will believe the dog is being aggressive. Putting herself in the mind of the dog, Breitner explains the pup’s thinking, “I’m only eight weeks old, and the closest thing to my face is your leg so I’m going after it.”

To the dog you are playing tug-of-war, and it’s just a game. Since it isn’t a game you want to encourage, in her app Breitner tells the owner to simply stop moving. “A dog’s prey drive is activated by motion.” You stop moving, and the dog will stop “attacking” the pretend prey.

Breitner and her team worked hard on DogDecoder and have a clear goal for its use. “The mission for the app is to have less people bitten because they understand dog body language, which turns into less dogs euthanized.”

You can purchase and download DogDecoder through the Apple store or Google Play. It costs just $3.99.

About the author: Wendy Newell is a former VP of Sales turned Grade A Dog Sitter. After years of stress, she decided to leave the world of “always be closing” to one of tail wags and licks. Wendy’s new career keeps her busy hiking, being a dog chauffeur, picking up poop, sacrificing her bed, and with other furry filled activities. Wendy and her dog, Riggins, take their always-changing pack of pups on adventures throughout the Los Angeles area, where they live together in a cozy, happy home. You can learn more about Wendy, Riggins, and their adventures on Facebook and Instagram.