Next on The Scoop: Is Your Dog a Control Freak Like Mine?

We talk to Patrick Noth, creator and star rapper in the video, about filming with so many cute dogs.

Have you seen the hilariously adorable “It’s My Dog’s Birthday” video making the rounds on social media? No? Check it out below, then continue reading. If you’ve seen it, watch it for a second, third, or even 10th time if you love it like I do.

Isn’t it the best? I recently chatted with Patrick Noth, the comedic actor who wrote the musical parody of both the hip-hop and pet parent cultures and who stars in the video as its main human character, rapper Kay-9. He shared these five fun facts about “It’s My Dog’s Birthday”:

1. The birthday dog did not belong to Noth, nor does Noth currently have a pup

“I come from a family of nine kids. We were never allowed to have a dog. It would have been too much for our parents,” he says, adding that he and his fiancé plan to adopt after their honeymoon in January. The couple picked out their new place in Manhattan with a dog in mind.

“It’s across from a park,” Noth says. “We’re excited. I will definitely throw my dog birthday parties.”

2. The birthday boy was played by a girl

Kay-9 refers to his dog as a “he” throughout the lyrics, but a female Boston Terrier named Beacon played the main canine character. A producer with MTV — which hosts the Hottest Video Countdown (HVC) web series, during which the birthday video aired as a parody within the parody itself — sent Noth a photo of the professional actor during casting.

3. All of the party guests were pros 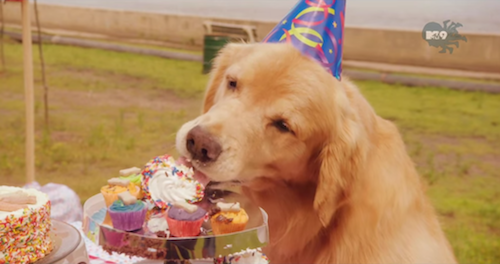 The dogs were in front of the camera together for about three hours, with Beacon putting in an extra hour for her scenes with just Noth.

“Beacon was a champ,” he says. “She definitely got tired, but she took at nap at one point and got reenergized.”

4. The picnic table scene was done in only two takes 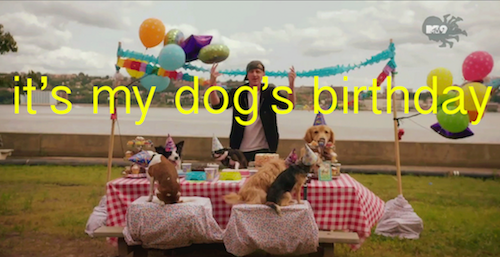 The video cuts to the scene throughout, showing the dogs sitting still, for the most part, around a table full of tempting doggie treats and cakes.

“The dogs were so good,” Noth says. “We got that master shot of them on the second try. That’s better than a lot of human actors.” 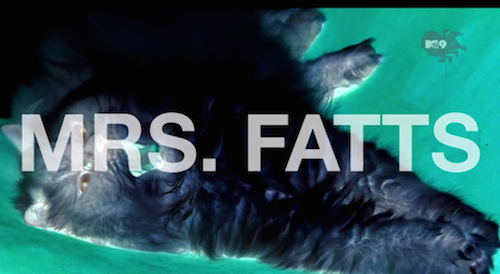 Noth raps: “Second rule of the day is no cats. Unless it’s a cat that he loves that goes by the name of Mrs. Fats.” Noth and Evans used stock video footage instead of casting a real kitty. Good call.

To see more episodes of HVC, visit mtvother.com. Noth also can be seen performing weekly at Upright Citizens Brigade Theatre in Manhattan, and he’s currently working on a pilot for Nickelodeon.

Let’s hear from you! Do you throw birthday parties for your pups? I do, and my dogs, Dolly and Spot, have a ball. Please tell us about your celebrations — and show us if you have pics — in the comments.